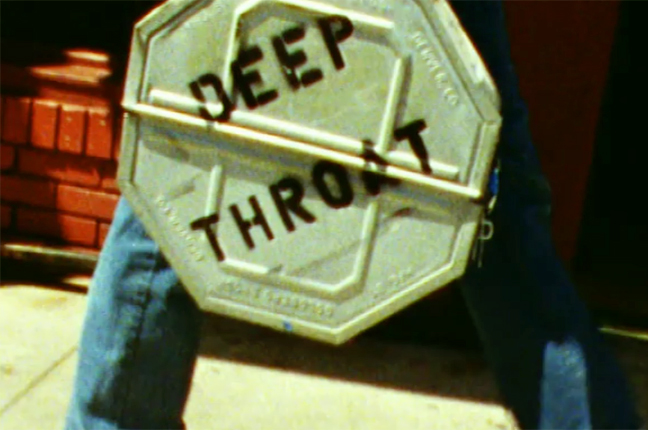 The documents are associated with an investigation concerning the suspected interstate transportation of pornography in 1973-74, and include interviews with the film’s director, Gerard Damiano, and its producer, Louis Peraino.

In January 1973, two FBI special agents went to the Fairmont Theatre in New Haven for an evening showing of Deep Throat (1972). The purpose of their visit was to start an assessment of whether the producers / distributors can be arrested for interstate transportation of pornography.

This is the detailed report of what they saw – as well as providing an inadvertently positive review (“the music… seemed well coordinated with tempo of character’s activities. Quality of film appeared professional.”) 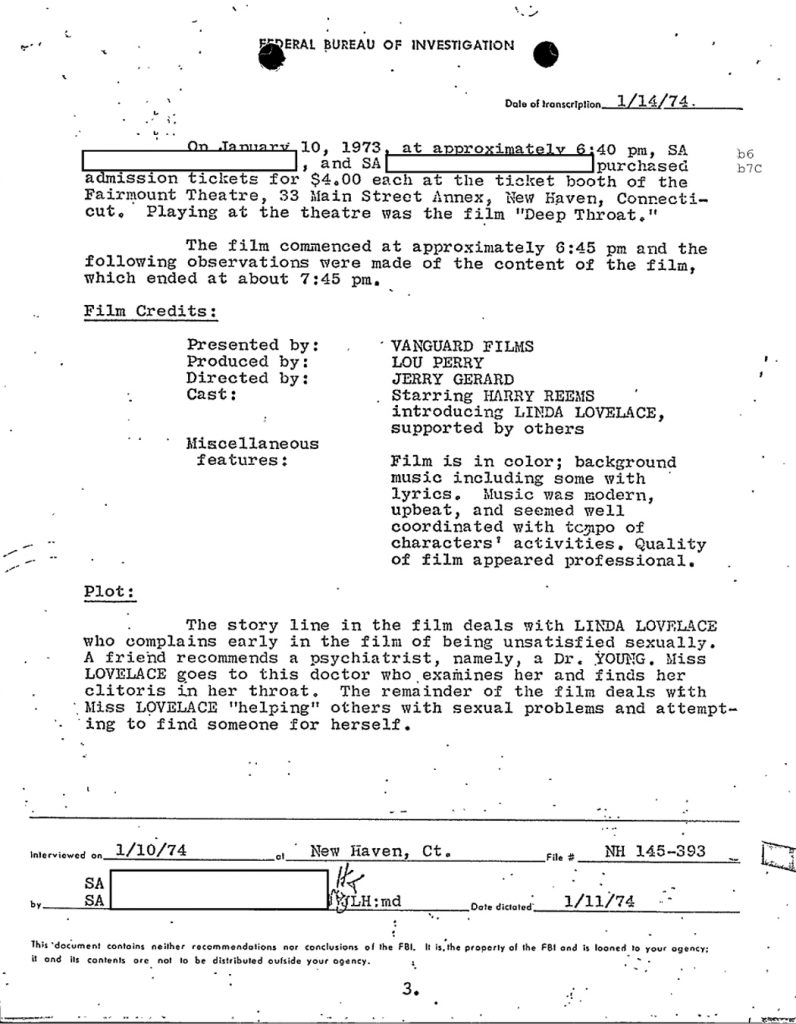 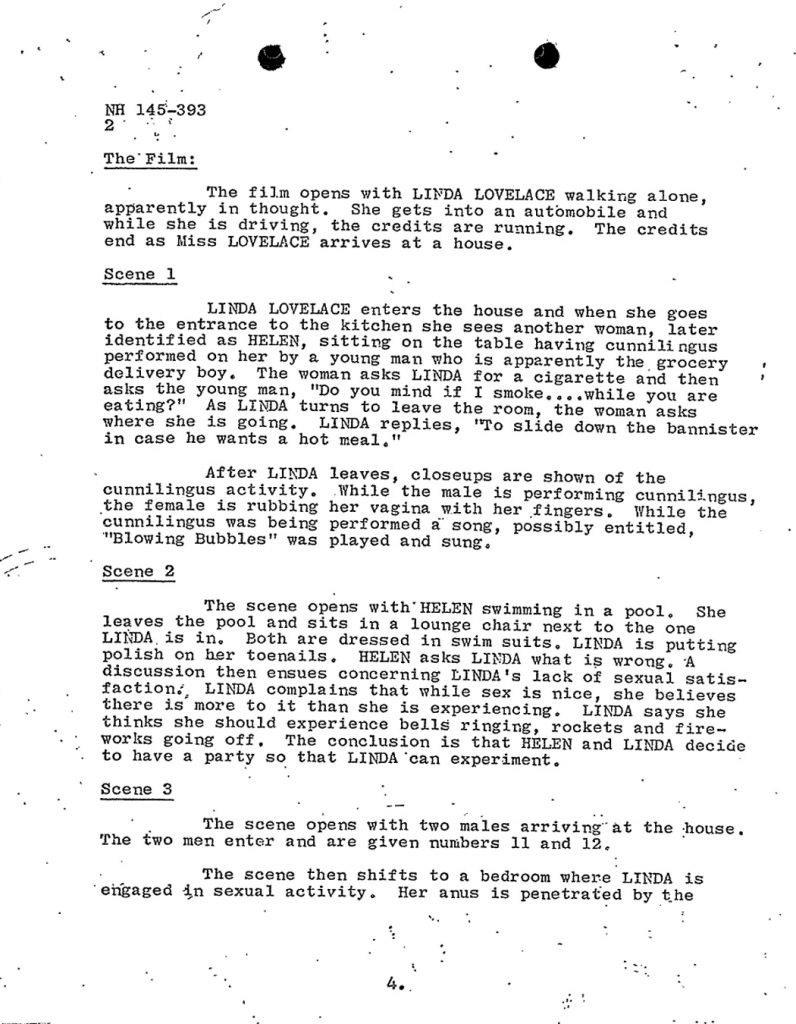 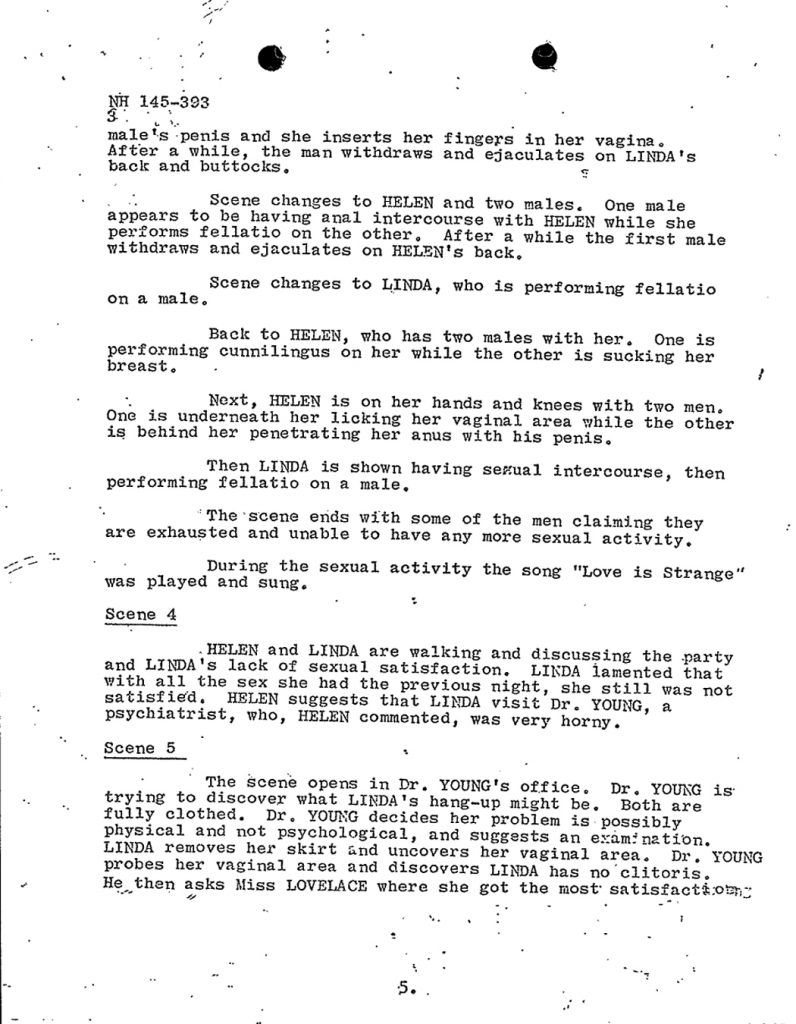 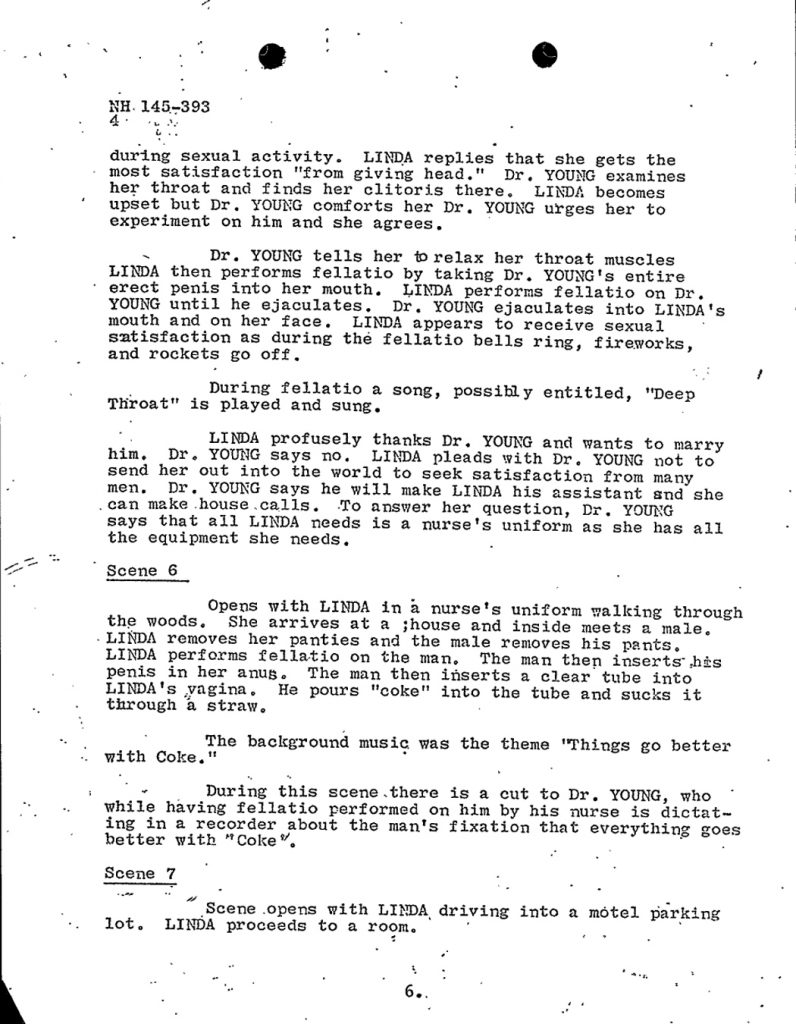 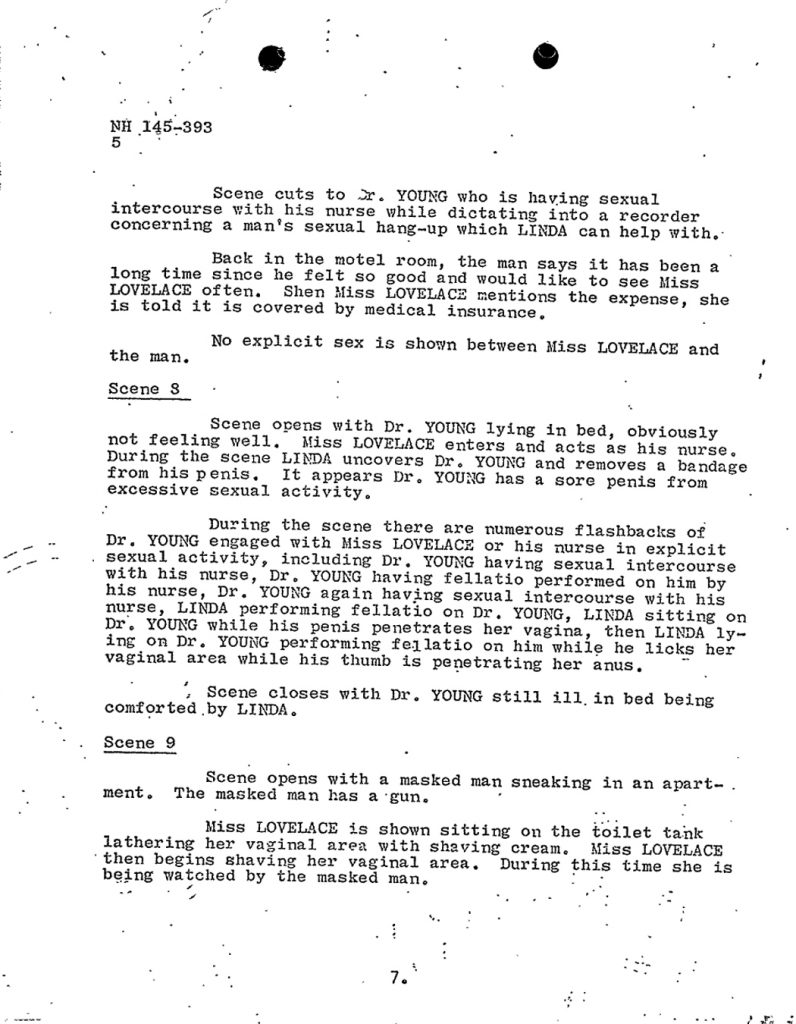 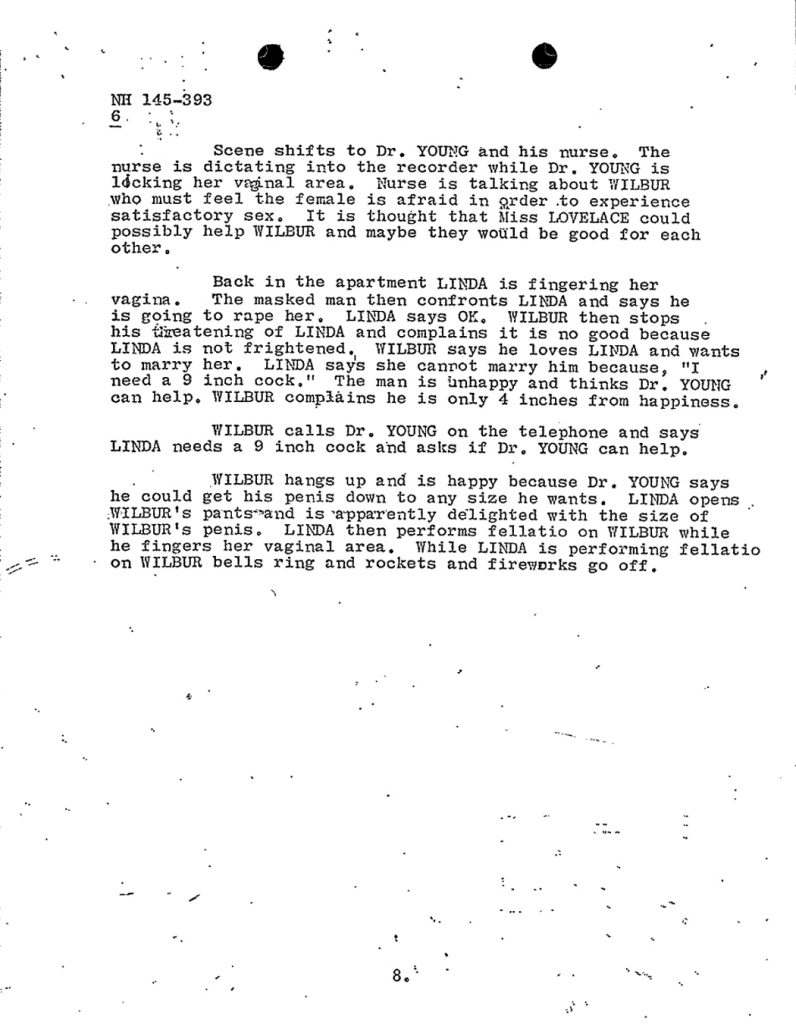 2. Deep Throat Director, Gerard Damiano, is Visited by the FBI

On May 18th 1973, four months after the FBI special agents went to see Deep Throat in New Haven, they interviewed the film’s director, Gerard Damiano.

What followed was an in-depth interview that touched upon the ‘Deep Throat’ production as well as Damiano’s business interests with the Peraino family.

Notes:
1. Damiano was interviewed at the residence of his friend and producer Herb Nitke. Nitke was owner of a chain of adult movie theaters in upstate New York. He produced Damiano’s Devil in Miss Jones (1973), as well as a host of adult films in the 198os through his company Nibo Films, that included Taboo American Style, 1-4 (1985). His wife, the photographer Barbara Nitke, was interviewed for a Rialto Report podcast.
2. According to Damiano’s testimony in this interview, he formed ‘Damiano Film Productions’ almost a year before he shot ‘Deep Throat.’
3. Louis Peraino, Damiano’s partner in ‘Damiano Film Productions, Inc’, was born on January 16th 1940 in Brooklyn, New York, USA. He was the son of Colombo crime family capo Anthony Peraino. Understandably, Damiano is reticent to provide any personal details for Louis Peraino. This was also evident two years later when Damiano wrote a draft of his autobiography (it was unpublished but extracts can be read here) where he failed to mention the Peraino family.
4. Damiano refers to the first film made by ‘Damiano Film Productions’, Sex USA, as “not a hardcore pornographic motion picture as it only depicted simulated sex acts.” The movie was in fact an explicit hardcore movie. 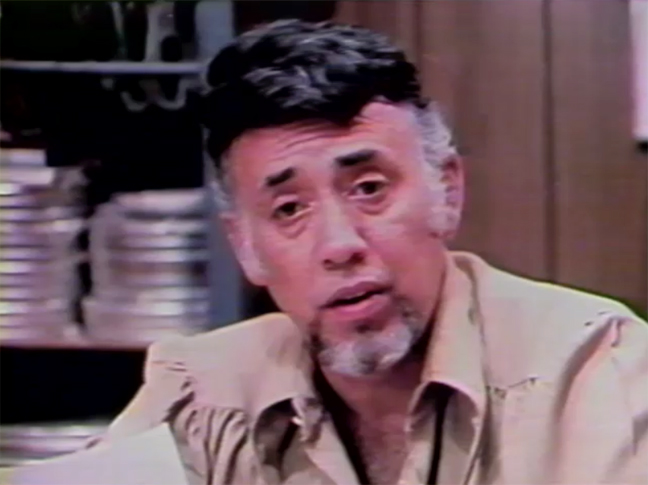 5. Damiano claims that ‘Deep Throat’ was made from the proceeds of ‘Sex USA’, whereas over 30 years later, Damiano told The Rialto Report that Louis’ father Anthony had loaned him the initial $22,500 in production costs.
6. Further details of the locations used in ‘Deep Throat’ can be found here.
7. Damiano refuses to reveal the location of a house used in Miami to shoot several scenes of the movie, or the owner of that house. The house was in the Coconut Grove area, and was owned by Sepy Dobronyi.
8. Damiano also refuses to name the cinematographer, Joao Fernandes. The Rialto Report interviewed Joao.
9. Damiano’s recollection was that the Florida shoot took place around Thanksgiving 1971. In fact, it was in January 1972.
10. Damiano deflects his role in the hiring of Linda Lovelace: by the time Linda and her partner Chuck Traynor met Damiano in his office in New York, they’d left Florida and were living and working in New York. He offered them work on ‘Deep Throat’ within days of their meeting. In the FBI interview, their first meeting ends casually, with Damiano agreeing to “look them up if he were to be in Miami”. Further, he says he doesn’t recall if it was his (unnamed) production manager who eventually hired Linda.
11. Damiano states that the ‘Deep Throat’ negative was shipped to Precision Laboratories in New York – which had problems with the color of the prints, so Louis Peraino stepped in and moved the negative to another lab. In fact, the change of lab was due to a mob-related conflict concerning control of New York film-developing labs.
12. Damiano discusses his role on the film Legacy of Saton (sic), which he says resulted in his decision to sell his share in ‘Damiano Film Productions’ to Louis Peraino for $15,000. He cites interference in the filmmaking process by Louis Peraino as the reason to sell. He does not mention that he was made an offer he couldn’t refuse by the Peraino family: a lump sum of $25,000 after which he was forced out of the partnership. The film was then distributed by a network of Mafia-connected associates of the Peraino family. 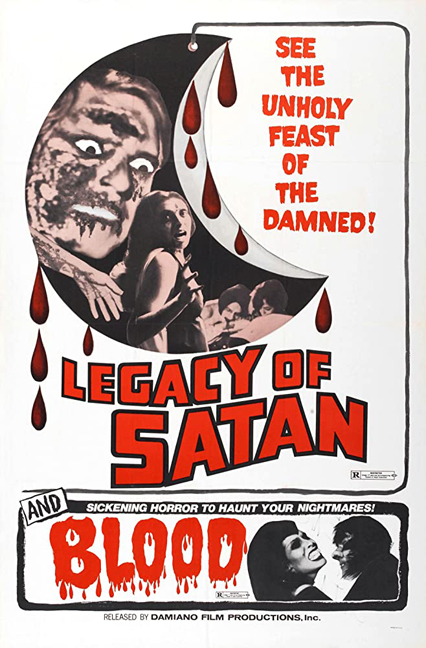 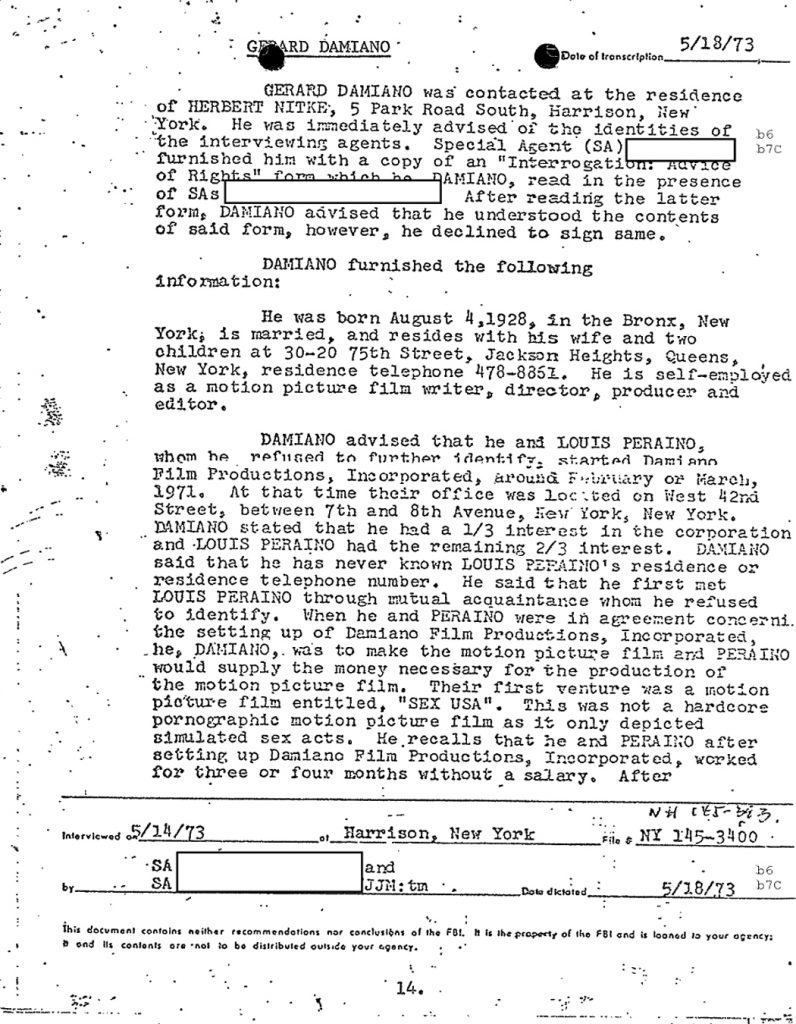 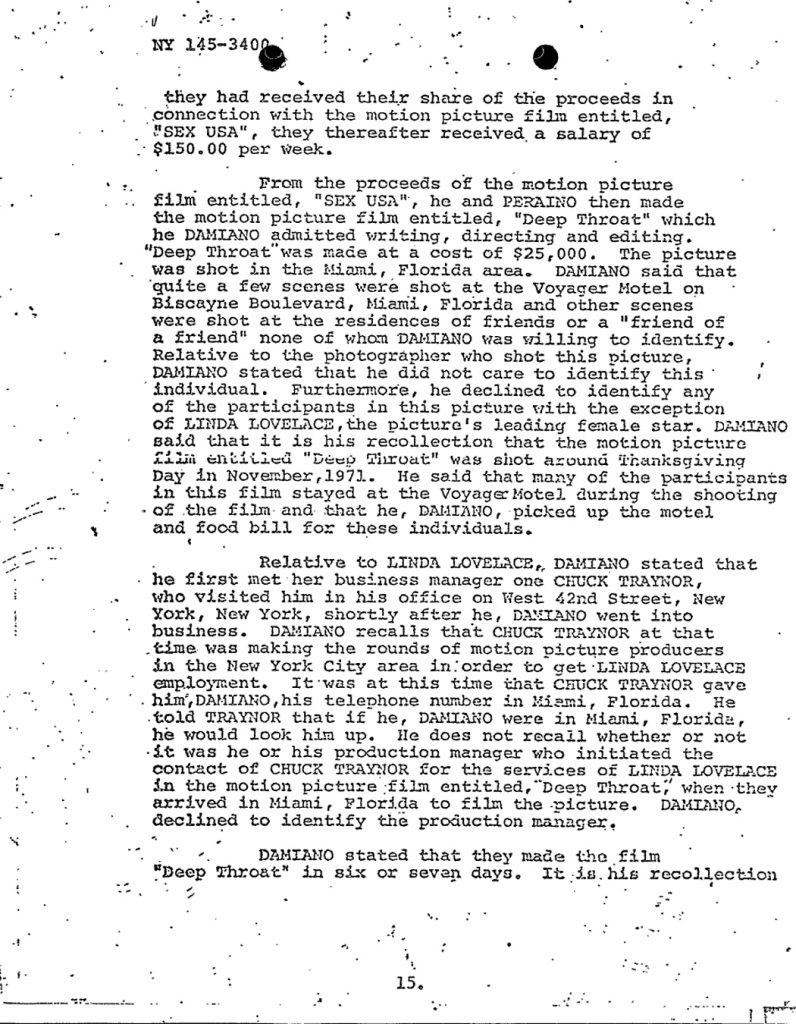 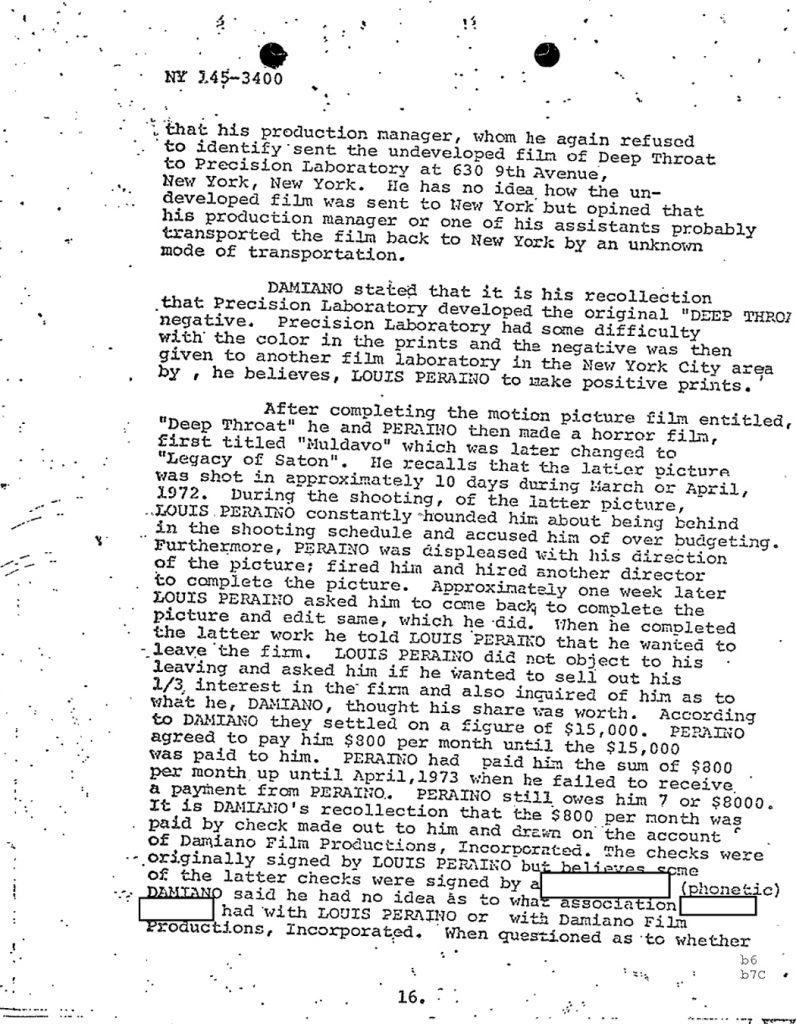 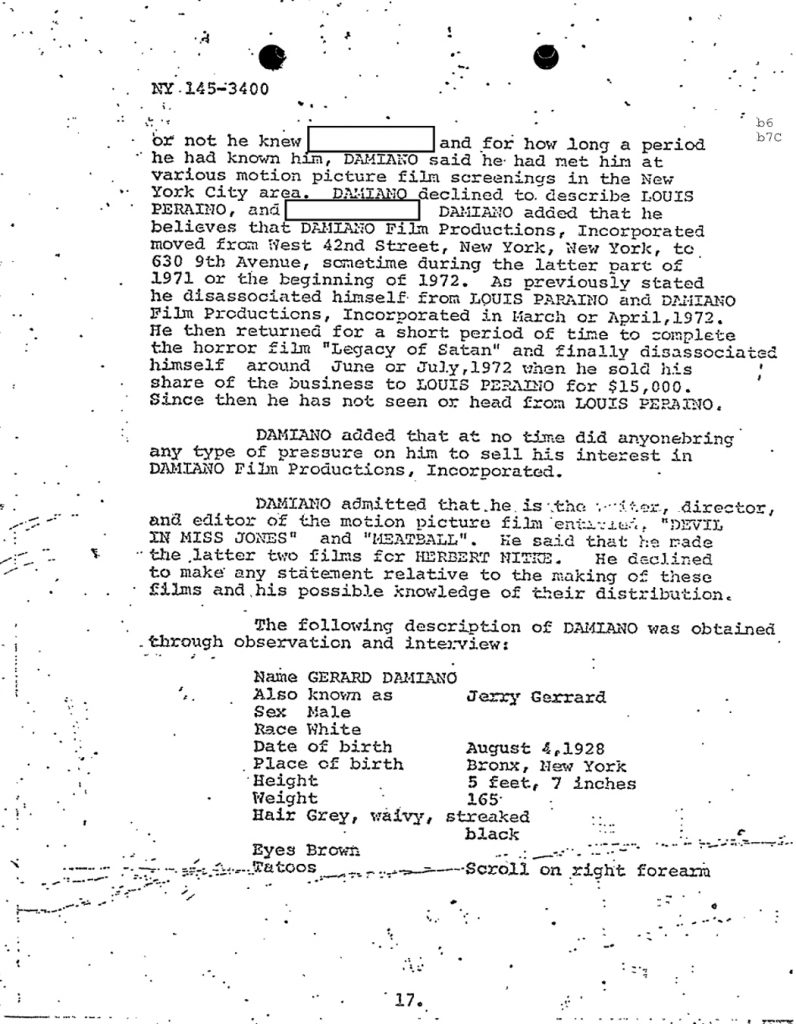 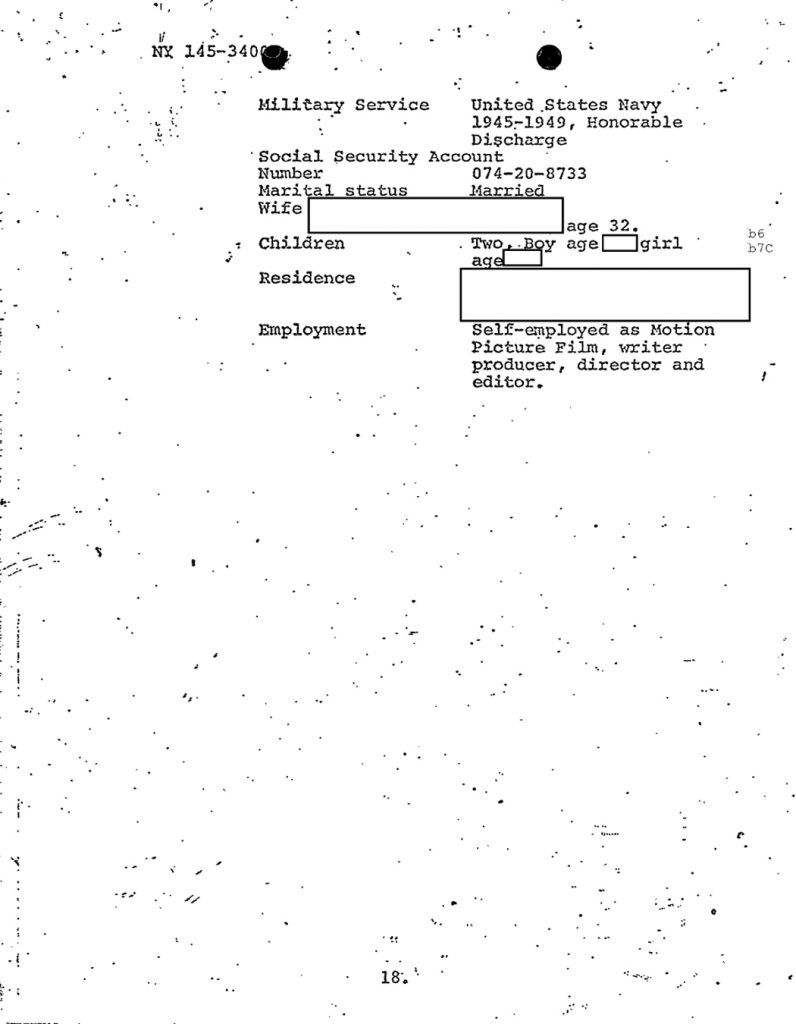 3. American International Pictures (AIP) is Visited by the FBI

On March 15th 1973, in a separate investigation, the FBI visited the offices of the film distribution company American International Pictures (AIP) in Boston, MA, to interview an employee in relation to the distribution of ‘Deep Throat.’ The FBI wanted details relating to the exhibition of ‘Deep Throat’ in two theaters in Vermont.

The employee spoke about Ellis Gordon Films, which had exclusive rights to ‘Deep Throat’ in many areas of the North East.

The employee described how they recorded shipping details of each film on Film Room Record Cards to ensure they kept a record of where each print was playing. These were the core records relating to their film prints. The same employee said that two people had paid AIP a visit three weeks previously and had requested the Film Room Record Cards relating to the distribution of ‘Deep Throat.’ The employee said he had no authorization to turn the cards over to the visitors, but that he had done so because he believed that one of them was an attorney. 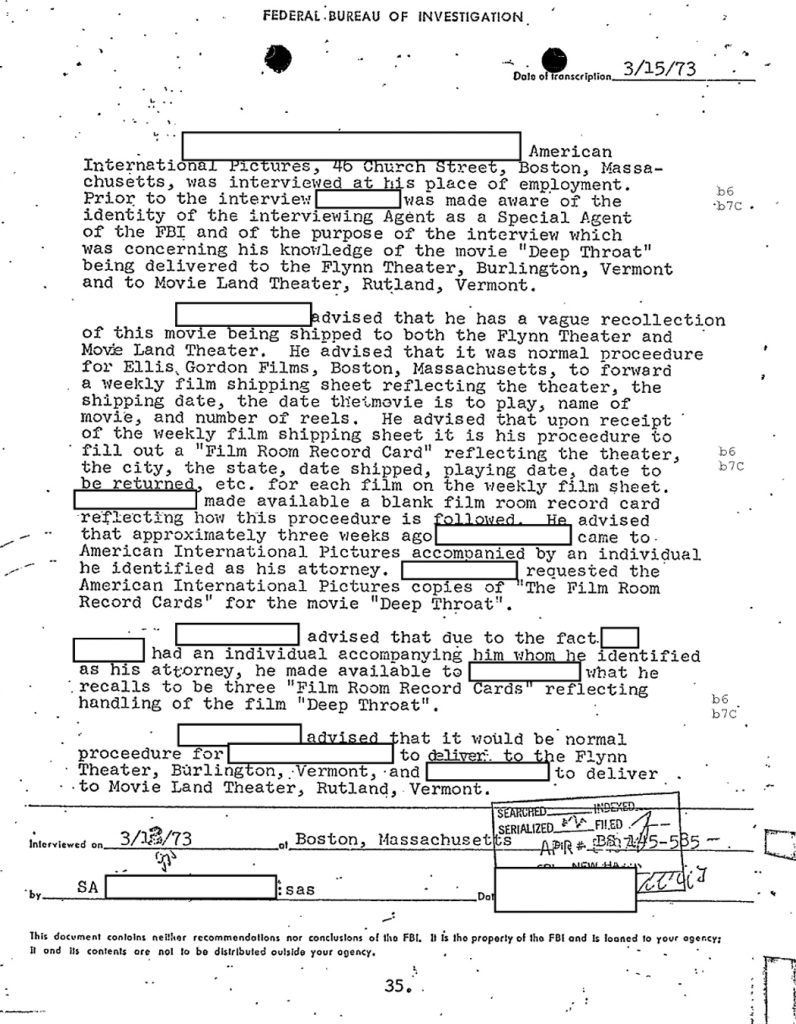 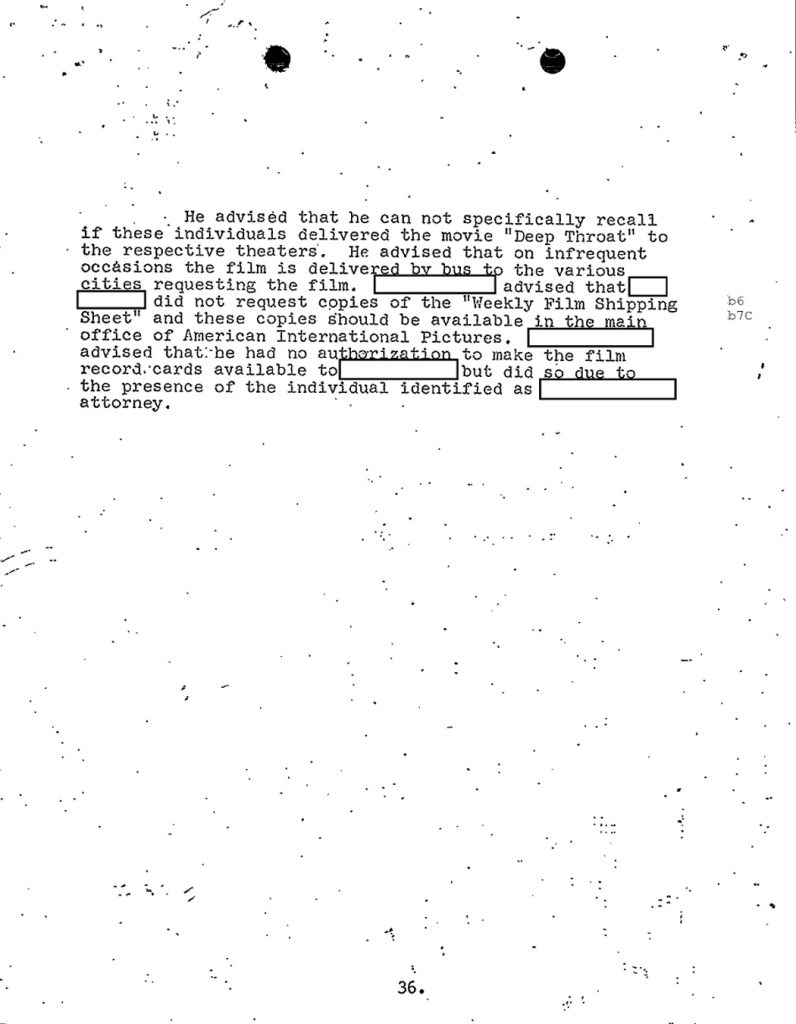 4. The FBI Raids the Fairmount Theater

On January 18th 1974, a search warrant was obtained to seize a copy of ‘Deep Throat’ from the Fairmount Theater.

The theater continued to show the film, using a copy. 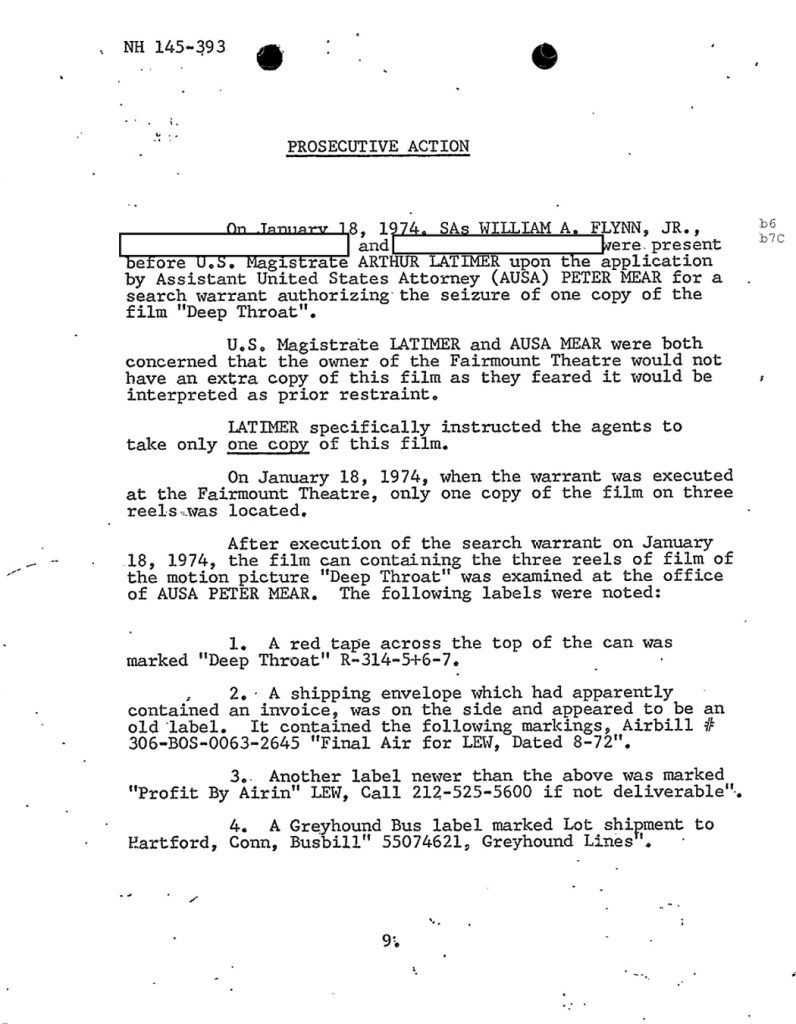 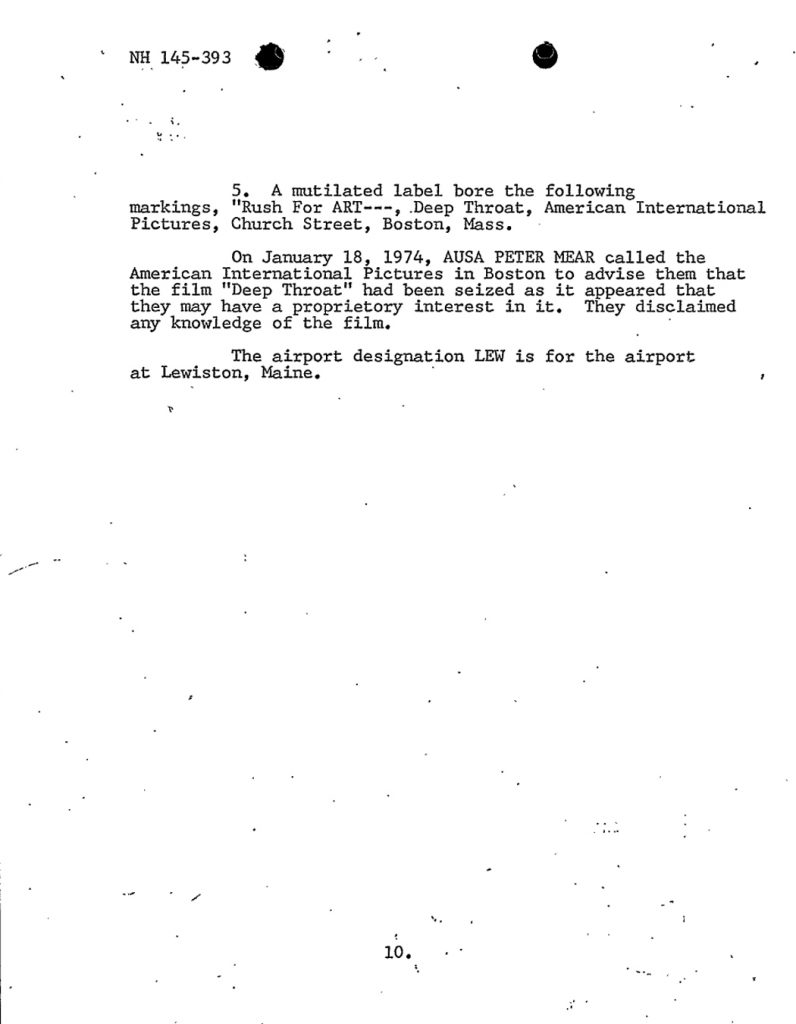 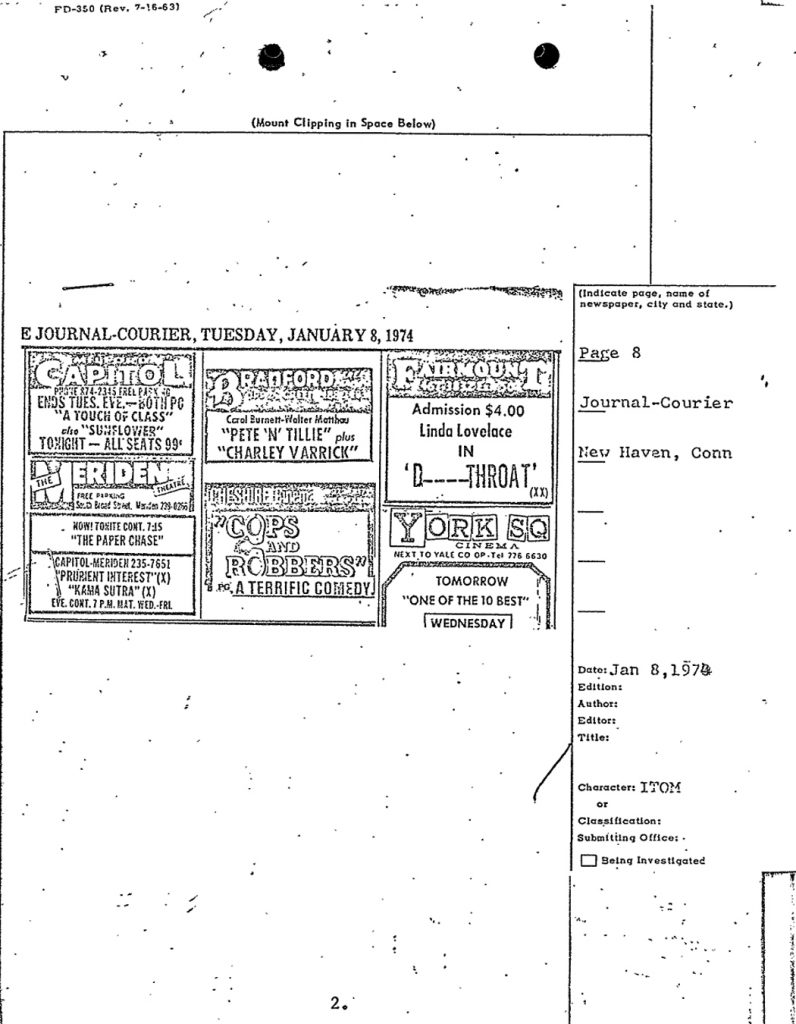 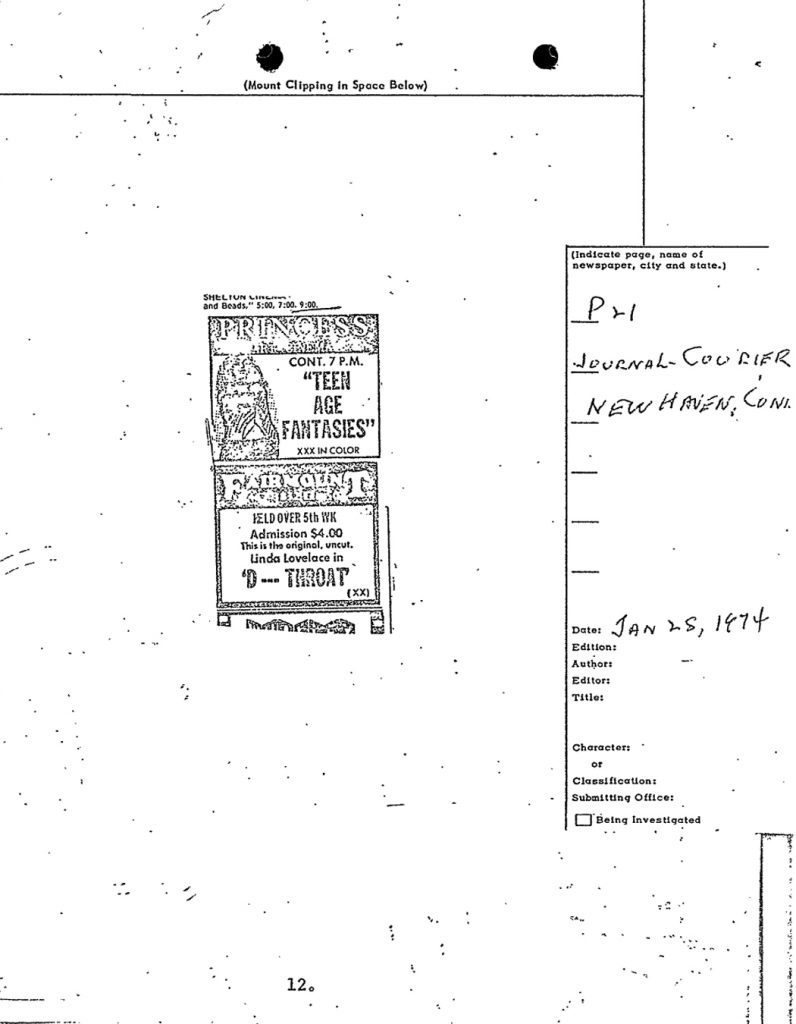 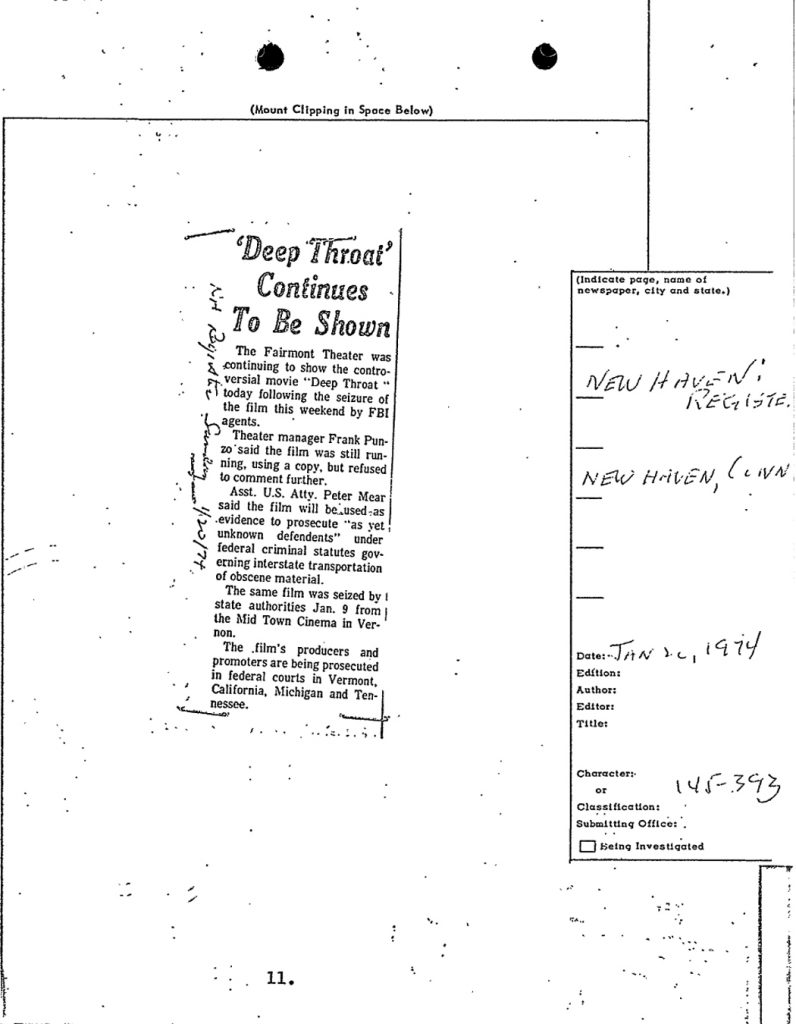 5. Deep Throat Producer, Louis Peraino, is Visited by the FBI

On January 18th 1974, the same day as the raid of the Fairmount Theatre, Louis Peraino is sent a letter informing him of the seizure of the film. Peraino states that the film seized is a bootleg copy of the movie and therefore not related to Gerard Damiano Productions, Inc.

On January 31st 1974, Louis Peraino is interviewed in his office at the Film Center Building. He claims that he is not engaged in the interstate distribution of obscene materials, and that the prints in question are bootleg copies.

From 1976 until 1980, Louis was jailed in Memphis on pornography charges related to Deep Throat and was indicted in 1980 as a result of an FBI investigation named “Miporn,” which investigated the pornography industry in southern Florida. 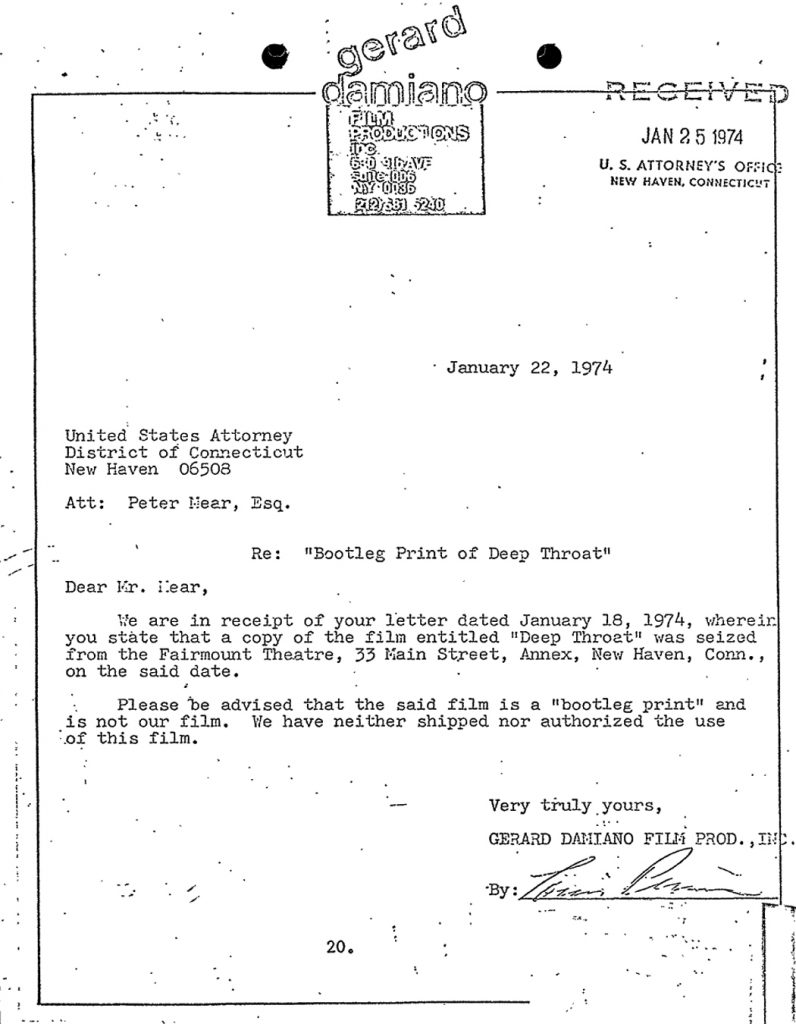 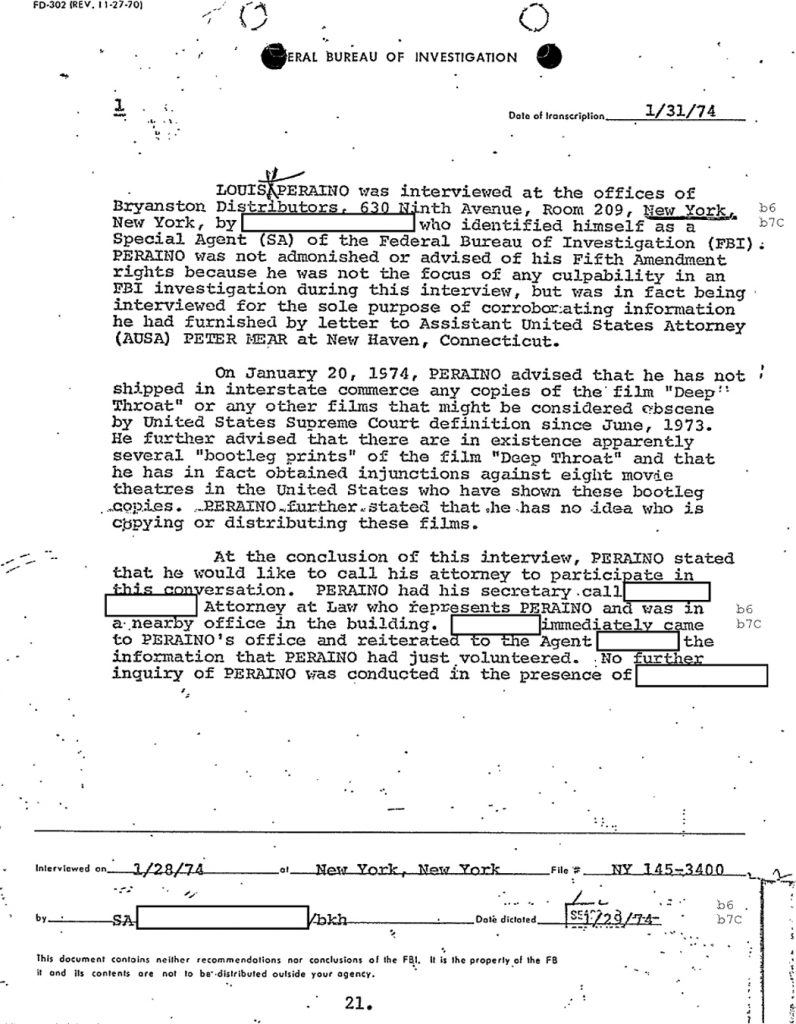 6. American International Pictures (AIP), is Visited by the FBI – Again

On April 3rd 1973, the FBI returned to visit the offices of the film distribution company American International Pictures (AIP) in Boston, MA, to interview an employee in relation to the distribution of ‘Deep Throat’ – this time to the Fairmount Theater.

Once again the employee spoke about how a person had paid AIP a visit and had requested the Film Room Record Cards relating to the distribution of ‘Deep Throat.’ The employee said he had no authorization to turn the cards over to the visitors, but that he had done so because he believed that one of them was an attorney. 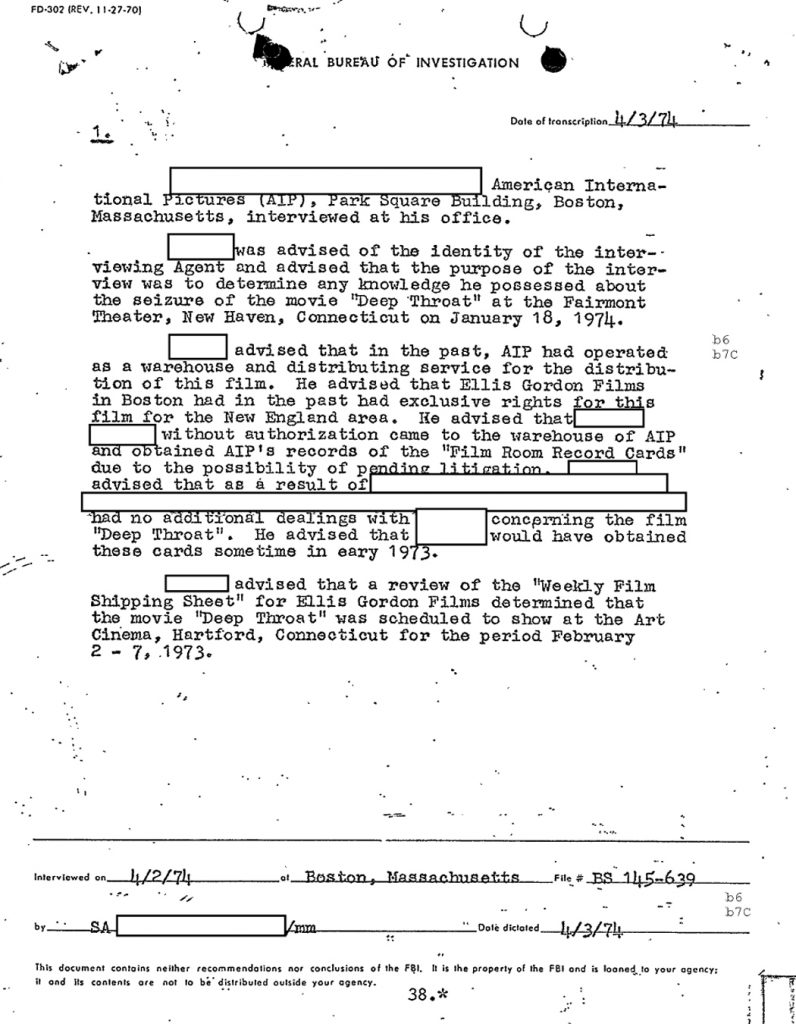 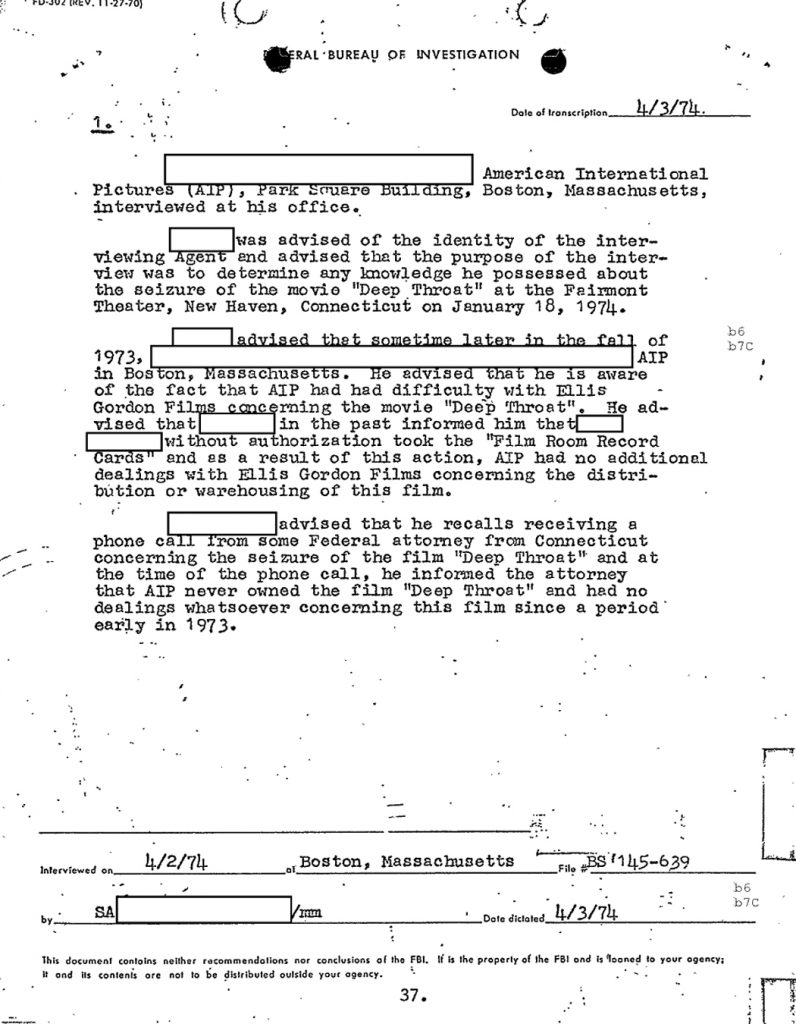 7. The FBI Drop the Case

On July 30th 1974, the FBI decided that there is insufficient evidence to bring a prosecution for interstate transportation of pornography, and the case is thus dropped. 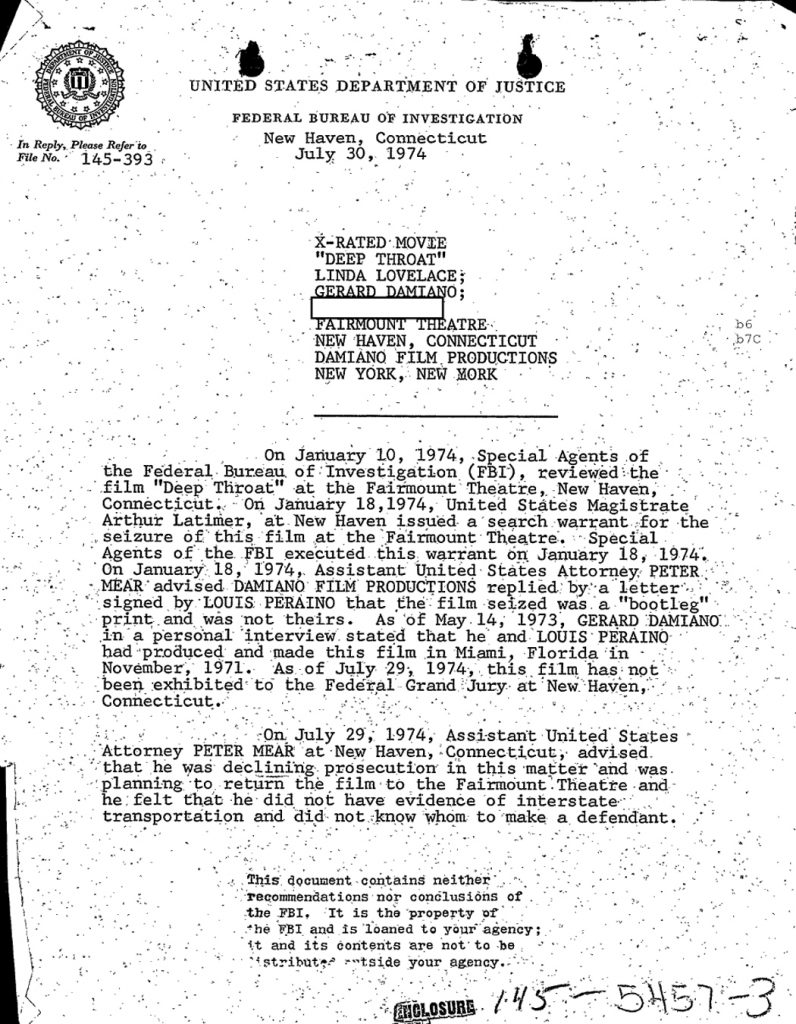 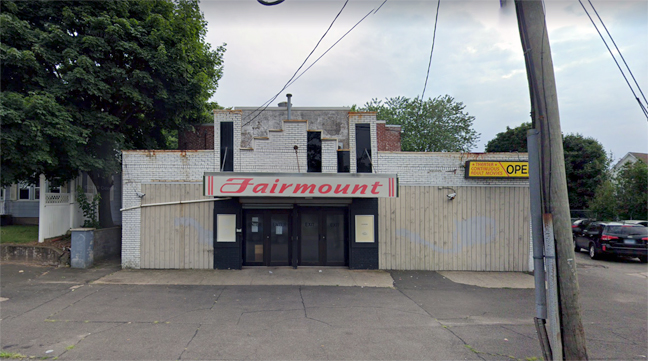