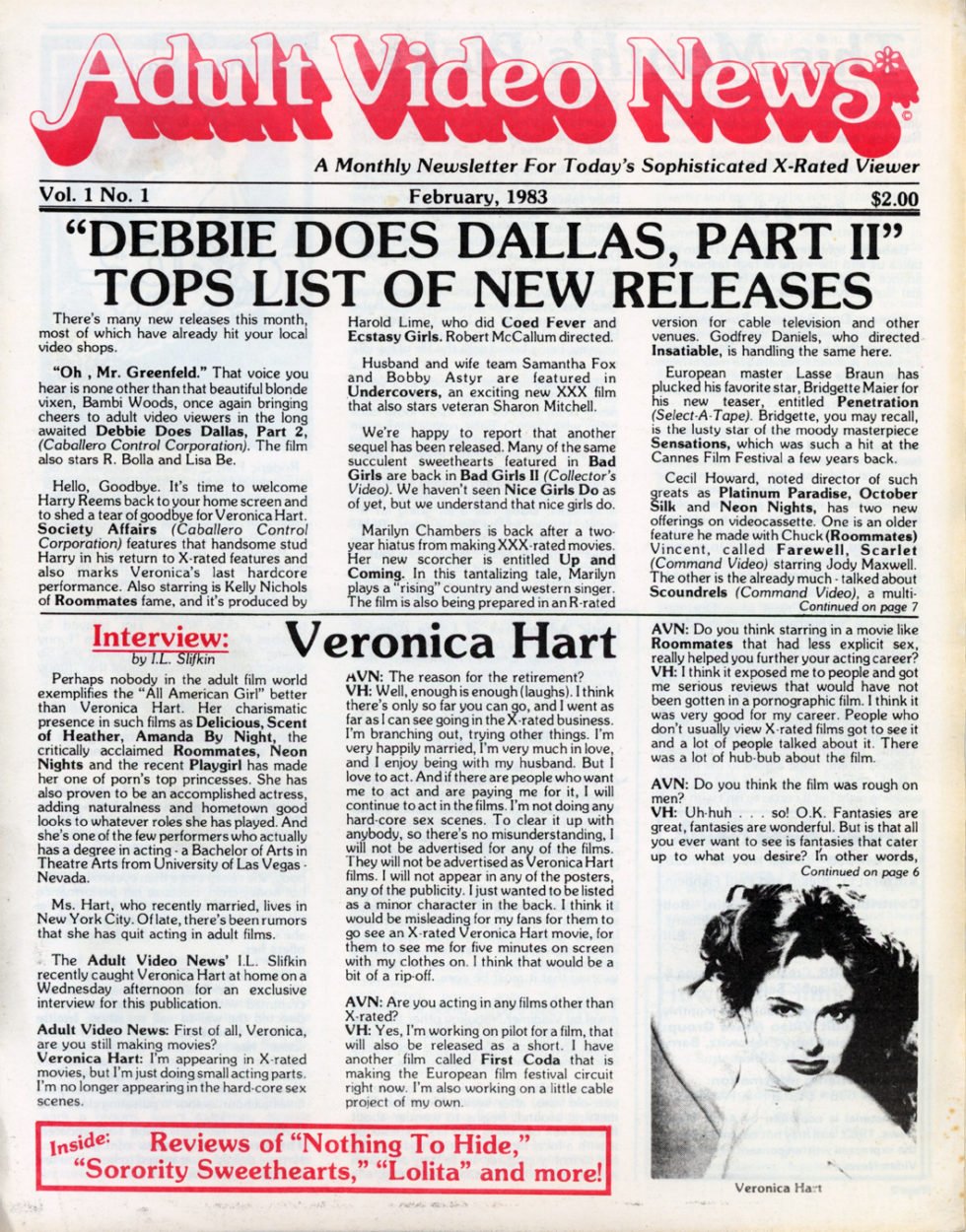 An important player in the history of the golden age of adult films was Adult Video News (AVN), a trade journal that covered the then-burgeoning adult video industry.

Growing from a basic 8-page newsletter it 1983, it eventually became a 300-page glossy magazine that dominated news coverage of the pornographic film business. The New York Times once said that AVN was to pornographic films what Billboard was to records.

This installment of The Rialto Report is in two parts: firstly we present the first year’s issues of the magazine – available in their entirety online for the first time. Secondly we tell the oral history of the birth of AVN, with the main players recounting their story of how the magazine was created.

Many thanks to Mark Kernes and Carol Walker for their help.

Adult Video News – The Oral History of the First Years

I never expected to be involved in the adult business, but I knew I’d publish a magazine; that was almost predestined.

I published a magazine about professional wrestling (‘Universal Wrestling’) when I was 14 years old, and in my freshman year of college I published ‘In Print’, a features and entertainment magazine distributed on all the college campuses in the Philadelphia area.

I did the usual sneaking-into-the-porn-theater-when-I-was-17 deal. The Philmont Cinema in Pennsylvania… an Alex de Renzy double feature, Desiree Cousteau getting an enema, a bunch of girls shitting on a character named Rocky DeSade and singing, “Bye Rocky, you’re full of shit.” I had no clue what I was watching, or what was to come. But the impact was overwhelming, given that both ends of that double feature ended up on my all-time greatest list.

I remember the first adult films I saw were on the big screen in Eastern Pennsylvania, where I was living. It was a double bill of ‘Hard Soap, Hard Soap’ and ‘Confessions of a Teenage Peanut Butter Freak’. This was before any video…

From 1977 through the 1980s, Movies Unlimited was the foremost video specialist store in the country. In 1982 Jerry Frebowitz, the movie-buff owner of Philadelphia’s busiest and best video store, asked me to manage the new Movies Unlimited store in Drexel Hill, PA.

It was an honor, but rather frightening since I was graduating college and heading for a career in retail.

The early 1980s we a time of change for the industry. Home videos had been available for a few years but were sold for high prices directly by adult film retailers. Now all of a sudden, they were available for rent from mom and pop video stores, where they were displayed almost side-by-side with Hollywood blockbusters.

When I realized you could hire adult movies on tape, I remember walking into Movies Unlimited to see their selection. What struck me was the sheer quantity… there were so many available. They were in glass cases – which were locked, so you had to ask someone to open it if you wanted to rent a movie – and I had no idea which tape to rent. I didn’t know the stars that well, so I was a little lost.

I got together with a friend from college called Irv Slifkin who was a great writer, and a print-shop friend called Barry Rosenblatt, and we put the idea together for a monthly video newsletter for the new consumer of home video – which we called Adult Video News.

Jerry Frebowitz at Movies Unlimited lent us some money, and he also allowed me to continue to work at the video store while I published the first issue of AVN.

It was an idea to publish a magazine that would be a classy, intelligent, and informative critique of the goings-on in adult film, and the soon-to-come-on-like-gangbusters, shot-on-video industry.

It could have been Science Fiction Video News or Children’s Video News. It just happened to be aimed at whatever was hot at the time.

The first issue of Adult Video News was published in February 1983. It was an eight-page newsletter, and was written entirely by Fishbein and Slifkin.

(They) got a famous adult star like Veronica Hart to do an interview with them (in the first issue). Hart is a terrific lady in a very personable way, but cripes, even charity goes so far.

It was a combination of interviews and eight reviews, introducing a four-A grading system. The first film review to appear was Babe from Arrow Films starring Samantha Fox. For the record, it got a three ‘A’ rating. And the first shot-on-video feature to be reviewed was Valley Vixens with Shauna Grant.

The newsletter was targeted firmly at home video renters – and it was subtitled ‘A Monthly Newsletter For Today’s Sophisticated X-Rated Viewer.’

I was at Movies Unlimited one day, paying for a video rental, when I noticed a little stack of AVNs next to the cash register. I’d seen Paul Fishbein around the store because he was managing it, and he knew I rented out adult tapes, so he handed me a copy of AVN saying, “Here – take one of these, it’s free.”

In the second issue, Kay Parker granted an interview, and the reviews expanded to include 11 new features.

The Ivory Soap girl, Marilyn Chambers, agreed to an interview in the following issue, and the publication doubled its size to 16 pages.

Back in the day when we started as a little eight-page newsletter, I probably reviewed about half of the films, but back then there were only about 20 coming out a month…

One day, I got talking with Paul while I was leafing through a copy of AVN. He was publishing the magazine out of his parent’s basement, and he said to me, “Do you think you’d like to write for the magazine and review the movies?”

I was working as a court reporter earning pretty good money, so I said, “Maybe… Does it pay?”

I always liked him, because he was sincere, but I never thought he would make it.

From the start, Fishbein didn’t quite fit into this strange new world. When sex star Marilyn Chambers came to town in 1983, he interviewed her in her hotel room. Playful answers to his questions turned into obvious flirting, yet Fishbein missed all the signals and didn’t realize he might have missed a chance to get laid until hours later. The following year, Fishbein visited his first set — an airplane romp titled ‘Lay Over’ — and was coaxed into his one and only on-camera appearance, as a drunk. While people screwed all around him, Fishbein was passed out, eyes closed tight.

What the flesh trade needed was someone who could let flesh fade into the background so the trade could come into focus.

Guess what? Retailers started subscribing, and we realized that what the adult world really needed was a trade publication.

What Fishbein saw were dollar signs, and while consumers were curious about new product, distributors and movie stores depended on it to survive. AVN shifted to target them, and Fishbein created a marketing guide with advice on selling tapes and tips for retailers on stocking their stores.

Someone was finally speaking to the renegades and smut-peddlers like they were CEOs instead of scum.

That was the turning point for AVN. I’ve heard it say that it was the day that AVN went from being industry observer to industry insider overnight – and in many respects that’s true.

I think Paul always wanted to be an outsider, but he wasn’t.

To rate the flicks, Fishbein employs 22 free-lance reviewers, including 3 women.

Pretty soon, Paul and AVN moved into their own office out on the Westchester Pike, west of Philadelphia.

I would stop by and pick up the tapes that interested me, and that I wanted to review. I typed up my reviews on a Macintosh, and dropped a disc off at the office.

In those days, I only reviewed two or three films a week, as I was still working as a court reporter.

At first, people thought it would never survive because it had no nudity, no sex. Think about that: A sex film magazine without sex!

This publication features no nudity and no foul language. It is very professionally written and produced. Everything is handled in a clean and tasteful manner.

In June 1984, AVN produced its first ‘Top Ten’ sales and rental chart. ‘Suzie Superstar’ was the first feature to make Number One on the new AVN charts.

AVN became the Bible for a godless industry, with Paul Fishbein is its rogue Moses.

It was the place you turned to first for the news, and you found many of the most interesting characters represented there.

The first editorial appeared in the July 1984 issue, and Ron Jeremy wrote his first column in AVN in September 1984.

Al Goldstein, writing in a letter to the editor in the November 1984 issue in response to Ron Jeremy’s first column:

Isn’t is enough that Ron Jeremy is rehashing the same old schtick routines, shutting up only long enough to suck his own cock? Must we now have his mindless trivialities preserved forever in print to offend our ears?

In February 1985, AVN become a full color magazine for the first time, with Ginger Lynn as its first cover girl.

I remember Paul going on early episodes of The Howard Stern Show where he would review the latest adult tapes.

Eventually (original co-founder) Irv Slifkin, tired of finding new ways to describe titles like ‘Top Buns’ and ‘Hannah Does Her Sisters’, says it was his decision to walk away without compensation.

(Original co-founder) Barry Rosenblatt, after partnering with Fishbein in two other, misguided business ventures, used a lawyer to make his AVN exit.

Alone, with heavy debts plaguing his business, Fishbein recruited a silent partner, fellow Washington High classmate Stuart Franks, who printed the magazine through his family’s shop and agreed to defer the $200,000 debt AVN owed his company.

In early 1991, Paul told me he was moving AVN from Philadelphia to Los Angeles, and asked me if I wanted to move there and take a full-time job with the company. I was still working as a court reporter, but I was tiring of the repetitive nature of my day job… so I accepted.

I packed up everything I owned in a Dodge Ram van, and I headed out for the west coast – and my new job.

AVN raised the industry up out of the muck and granted it respectability. I want to thank Paul Fishbein and AVN for lifting this industry out of the gutter.

Like the rest of the industry, we grew, took chances, hit rock-bottom a couple of times, survived Ed Meese, and bonded with a common cause: free speech.