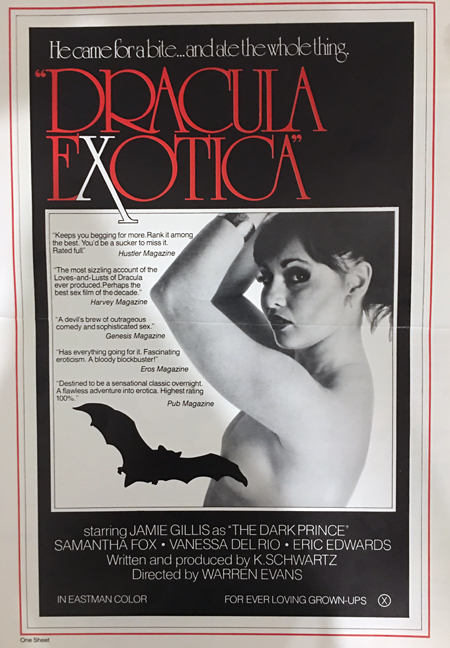 Shaun Costello and Ken Schwartz followed their successful collaboration on FIONA ON FIRE, easily the best porn adaptation of Otto Preminger’s classic noir LAURA (territory Costello had frequented before with his low budget FIRE IN FRANCESCA), with DRACULA EXOTICA, a glossy mix of horror, humor and hardcore sex. Unfortunately, they also had a falling out over this one, director Costello claiming that writer/producer Schwartz had merely managed to squander most of the movie’s sizable budget. Even if it were so, this barely reflects on the film’s uniformly high production values, beautifully complemented by its superstar cast and terrific script that – for copyright reasons ? – virtually creates a whole new background for the Prince of Darkness, renamed Leopold Michael Georgi Dracula (though still from Transylvania) and portrayed with tremendous screen presence by adult film veteran Jamie Gillis in a career performance to rival the one he gave in Radley Metzger‘s OPENING OF MISTY BEETHOVEN.

The story begins in the Carpathian country side in 1590 with the idle nobleman dividing his time between drunken orgies (involving the likes of Marlene Willoughby, Christine De Schaffer, Marc Valentine and the ubiquitous Ron Jeremy) and lusting for chaste, unattainable gamekeeper’s daughter Surka (Samantha Fox in a fetching auburn wig) whom he cannot marry because she is beneath him. Therefore she’s confined to a nunnery instead. One night, overcome with passion, he drags her from her bed chambers and violates the terrified young virgin in front of his inebriated underlings. Rather than take the life of the man she loves, even in spite of what he has wrought, Surka kills herself with her rapist’s knife. Finding her lifeless body, the inconsolable Count pulls the dagger from her fatal wound and plunges it into his own chest, thereby giving birth to…the Curse of Dracula !

Nearly four centuries later, the Count rises from his tomb, awakened by the desires of a pair of vampire twins (Denise & Diana Sloan, at least one of whom is remarkably limber as the girl’s pretzel-like contortions attest), ordering his faithful servant Renfrew (Gordon Duvall, who had memorable non-sex bits in Costello’s PANDORA’S MIRROR and HOT DREAMS yet did perform sexually with Seka in both Leonard Kirtman’s PRINCESS and CONFESSIONS OF SEKA and with Veronica Hart in Carter Stevens’ TWILITE PINK) to douse the women with holy water as he has to leave for America to join a tourist he has noticed taking the tour of his castle and who looks exactly like his dearly departed Surka. Unbeknown to him, Sally (also played by Fox) is actually a spy working for the CIA, uncovering unsavory international wheelings and dealings for her hilariously self-important employer who goes by the code name “Big Bird” (an unexpected comic turn by the ever reliable Eric Edwards). Fox, looking mighty fine by the way, does one of the funniest sex scenes ever as she dresses up as a precocious little girl to extract important information from a corrupt Albanian official, indelibly played by her regular screen partner and sometime boyfriend Bobby Astyr. Suspected of espionage, Dracula’s immediately put under government surveillance.

Sailing into New York harbor, he has already recruited the estimable talents of Vita Valdez (who else but Vanessa Del Rio?), a devious drug smuggler pressed into secretarial duty by the cunning Count who memorably queries about her typing expertise as he goes down on her ! As can be expected, Vanessa singlehandedly ups the raunch factor with a frenzied group grope, draining such formidable stallions as Ron Hudd, Dave Ruby (the Al Bundy of porn) and Ashley Moore from their vital fluids. A slab session with necrophiliac morgue assistant Herschel Savage brings her back to life, just in time to divert nosy inspector Blick (essayed by Al Levitsky in bumbling, Clouseau-like fashion) from Drac’s trail. Not so with Sally who finds herself drawn to the man she has to investigate, leading her to realize that she is indeed his long lost lover’s reincarnation. In an ending pretty much lifted ad verbatim (with a nice twist pertaining to the “nature of the beast”) from Stan Dragoti’s highly enjoyable LOVE AT FIRST BITE, true love overcomes such obstacles as several murderous instances and a 400 year age difference !

Costello, by now settling into his latter day “Warren Evans” guise, proves his sophistication as a filmmaker with a number of stunningly composed shots, the most impressive of which may be the perfect between the legs shot of a self-pleasuring Fox working a candle in and out of her nether regions in front of a large mirror reflecting Dracula’s ghostly apparition. He never allows his visual flair to get in the way of good old fashioned storytelling skills though, working through a convoluted plot at nearly breakneck speed, tossing off genuinely funny gags left and right while still finding time for the requisite number of well-done carnal encounters. In addition to those already mentioned, Gillis and Fox give evidence of special chemistry in their climactic union with not even the Count’s copious facial pop shot diminishing the scene’s swooningly romantic flavor. 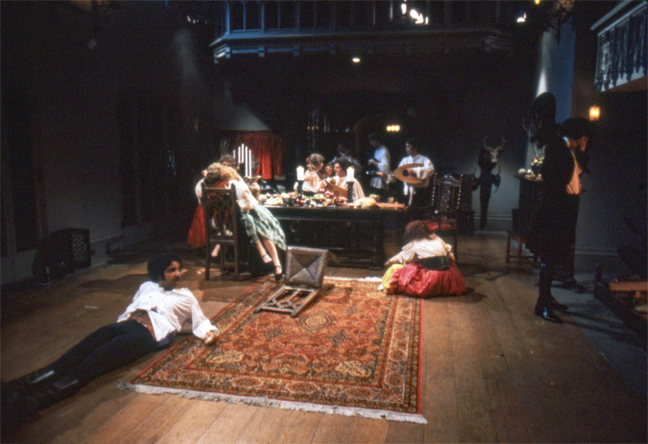 Ron Jeremy (left) and the cast of ‘Dracula Exotica‘ 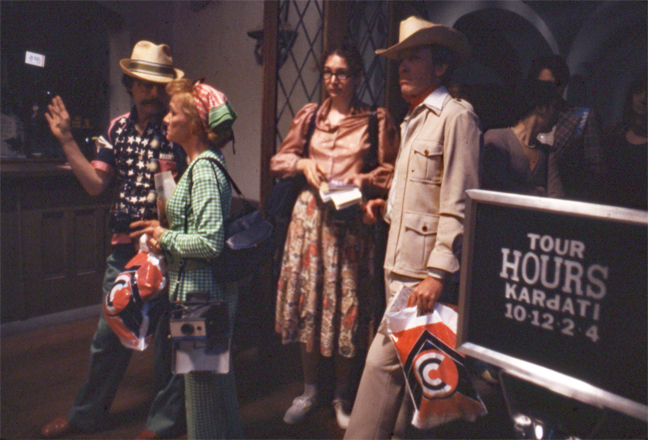 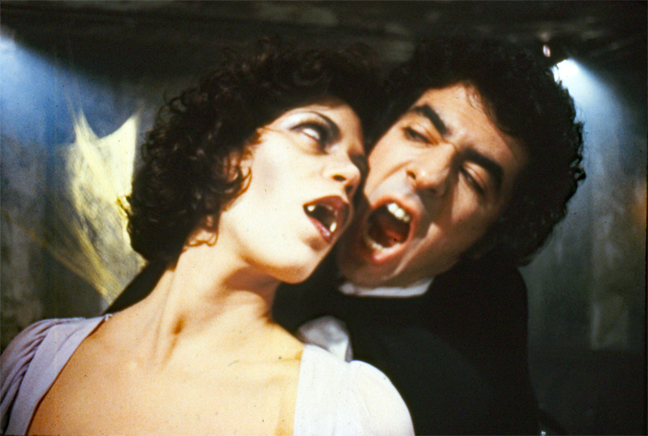 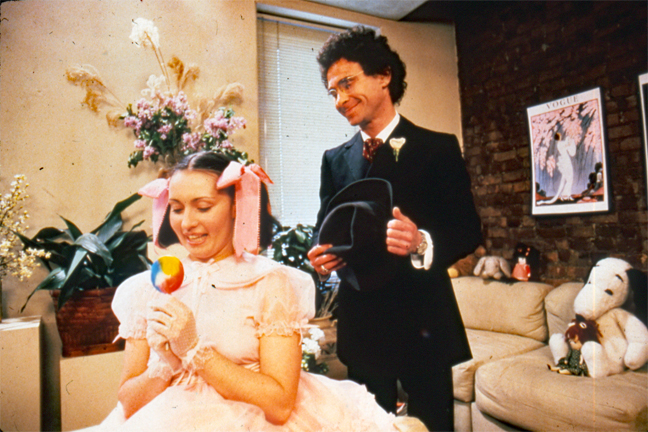 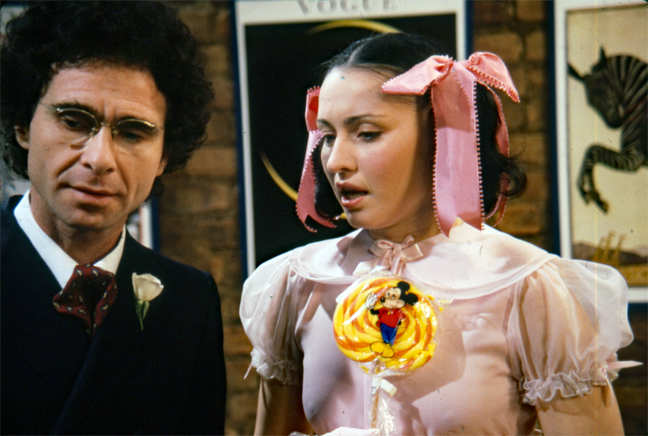 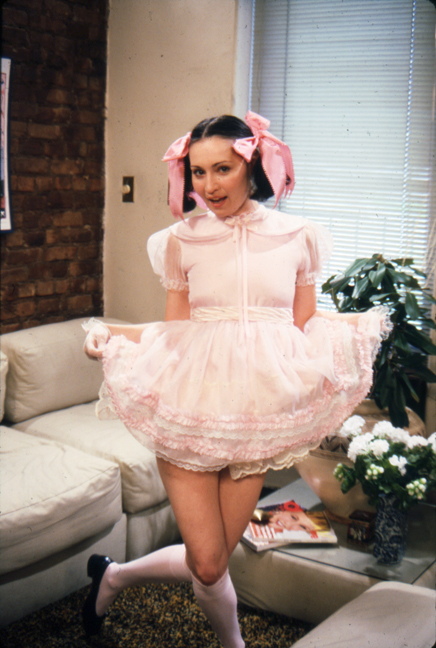 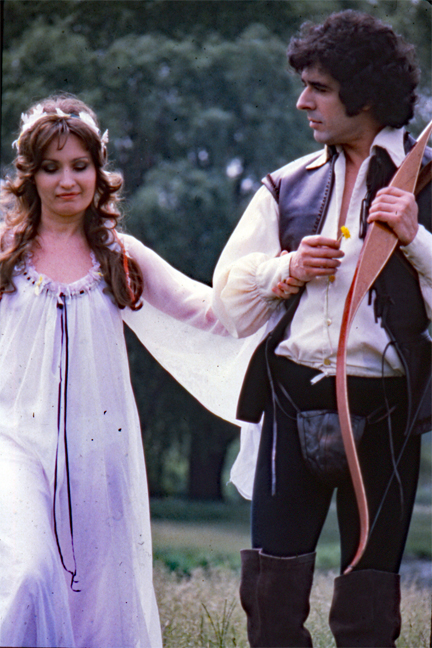 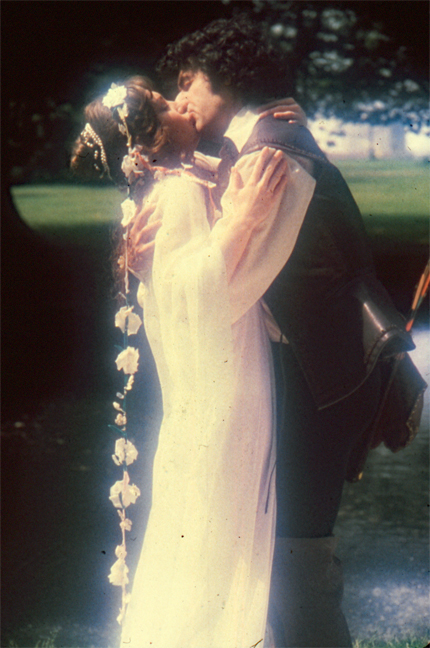 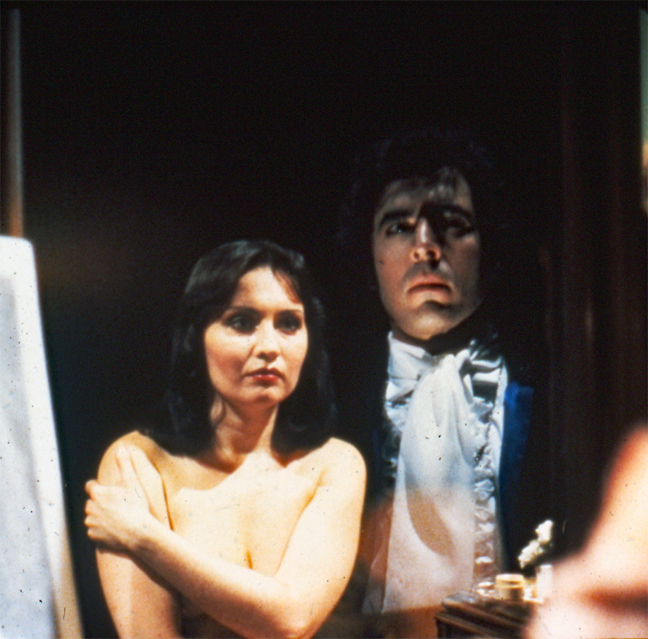 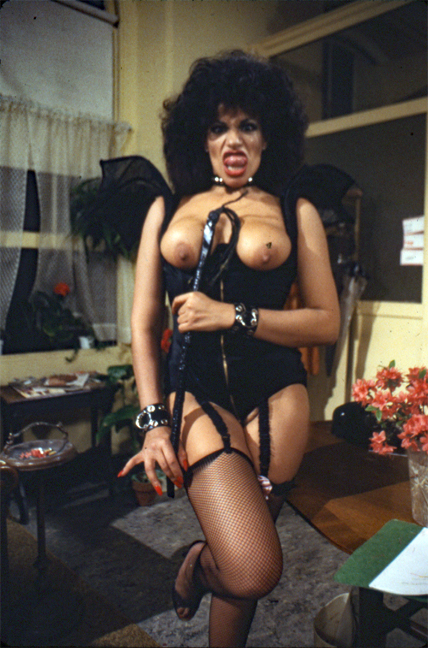 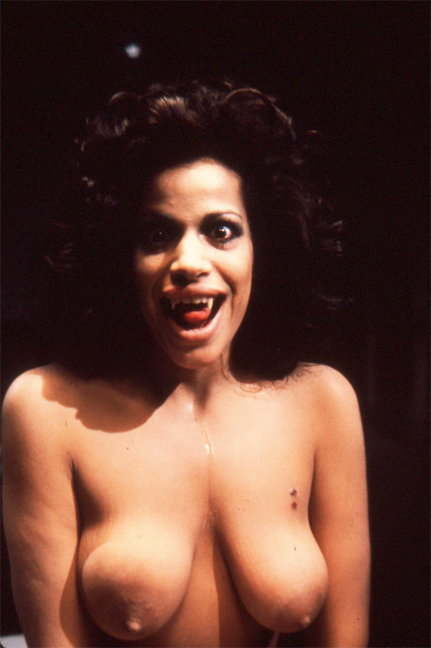 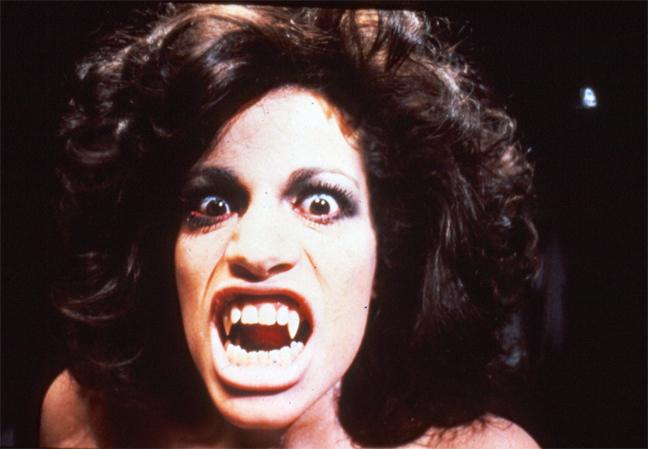 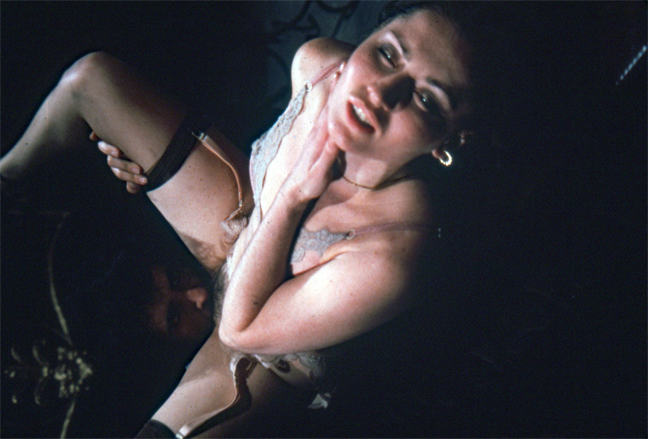 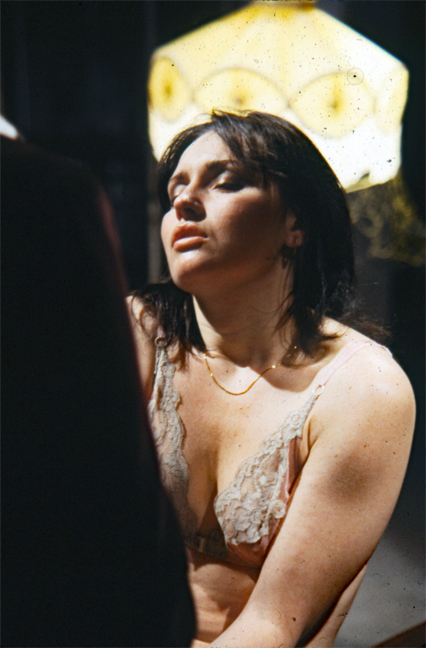 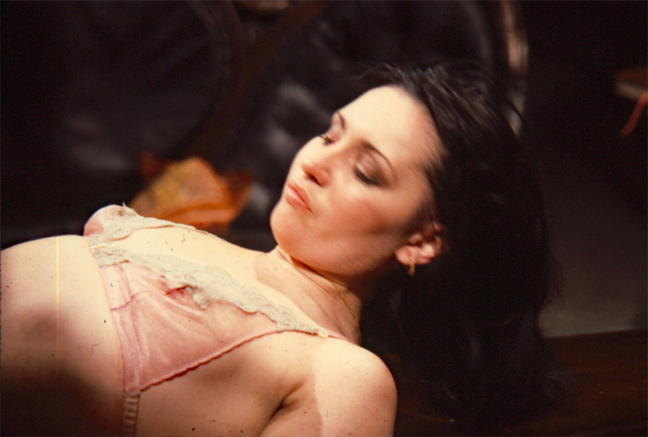 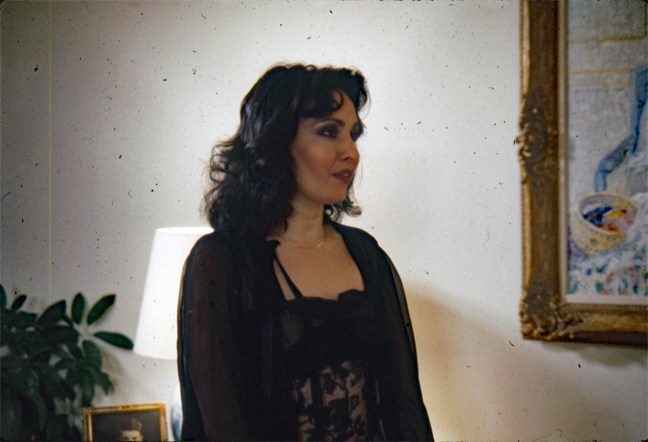 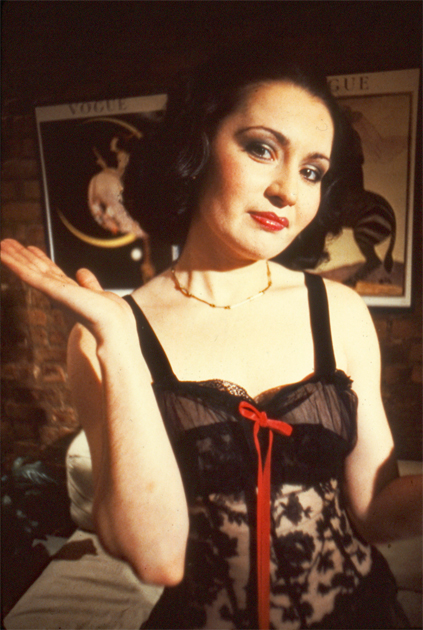 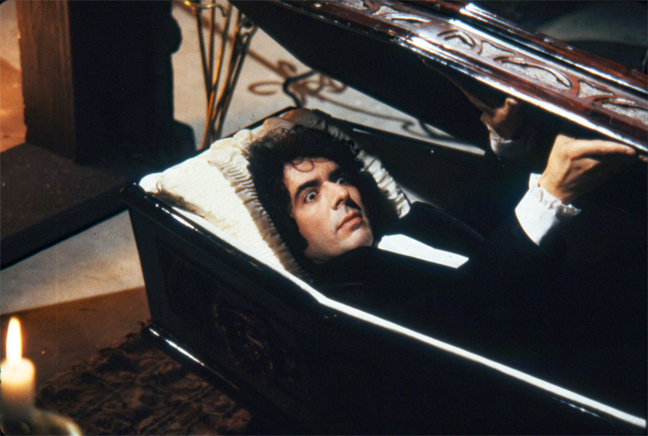 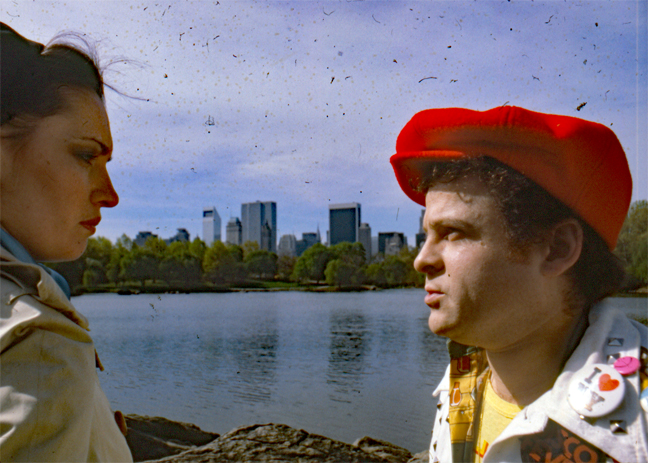 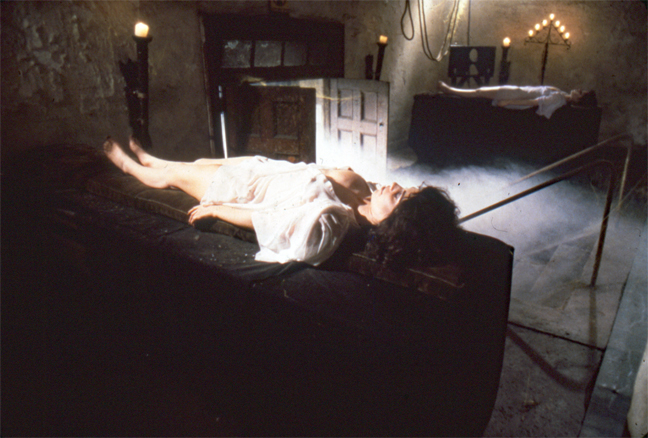 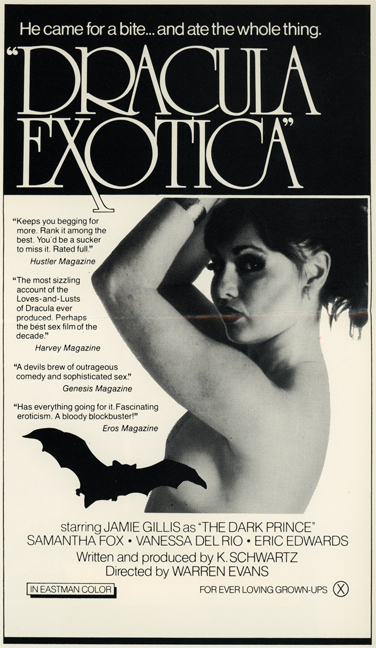 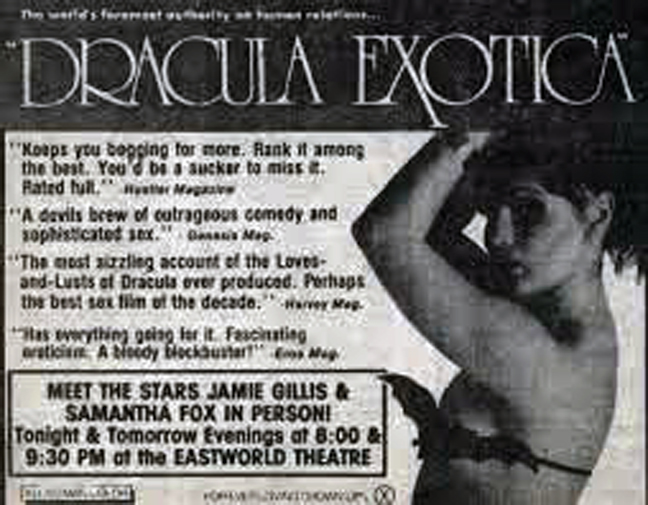