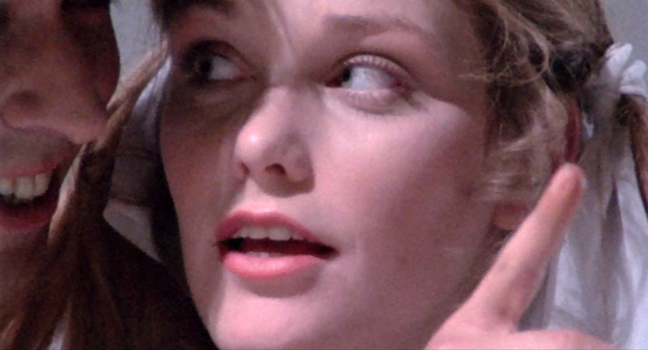 In the last Rialto Report, we asked: if an adult film director shoots footage of an actress that he then uses across multiple films, is he obliged to pay that actress multiple times?

In 1975, Radley Metzger shot additional scenes during the making of ‘The Opening of Misty Beethoven‘ – footage he planned to use in future movies.

The problem was that Misty Beethoven herself, Susan Jensen (aka ‘Constance Money’), strongly disputed Radley’s right to do this – and she fought back.

This disagreement resulted in a four year legal process, acrimonious arguments, and a multi-million dollar claim for damages brought by Susan against Radley.

The Rialto Report has researched this story for several years, obtaining original documentation relating to the case which is presented here for the first time.

It tells a fascinating behind-the-scenes story of this landmark film and dispute.

What do you think of the merits of the parties involved?

The first part of this story appeared on The Rialto Report last week.

Susan Jensen was claiming damages and compensation totaling $2,250,000 – but she didn’t just take on Radley Metzger through the courts. She also waged war in the media – under her preferred acting name ‘Jennifer Baker’. 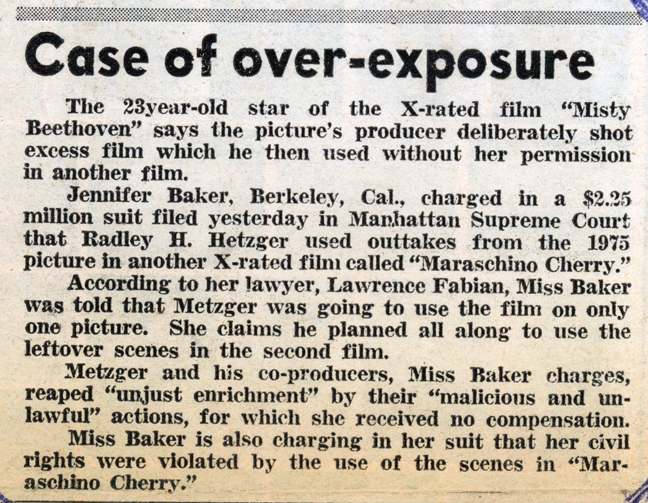 Susan was living in San Francisco at this stage, but had returned to New York the previous year in May 1977 to star in another adult film, ‘Anna Obsessed‘. In 1978, the first publicity for this new film began appearing. 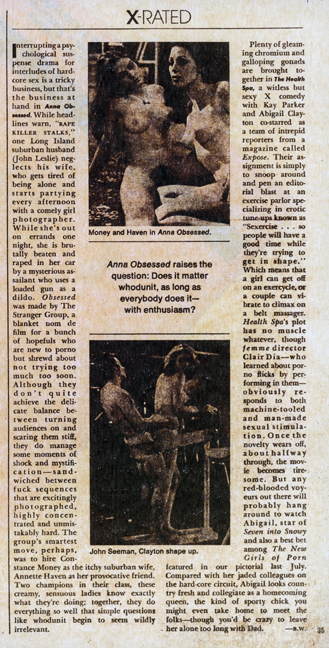 Meanwhile Radley and his attorney, Ed Grainger, asked for more time to respond to the allegations made by Susan in her deposition. This request was granted. 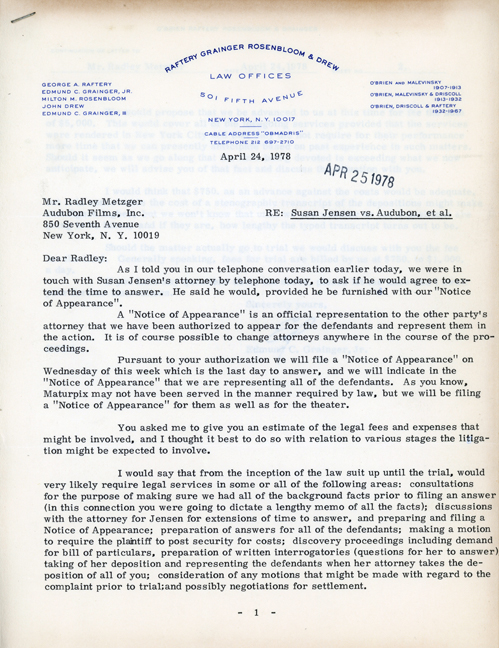 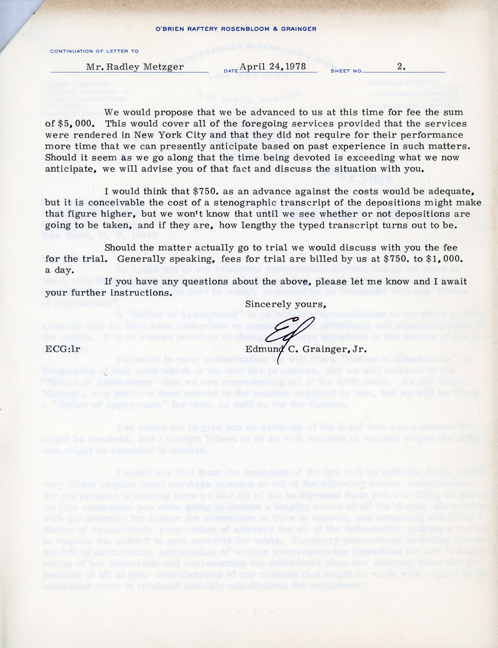 In the meantime, Ed Grainger asked Radley to summarize his recollection of the chronology of events. Radley wrote out what he remembered and submitted it to his lawyer. 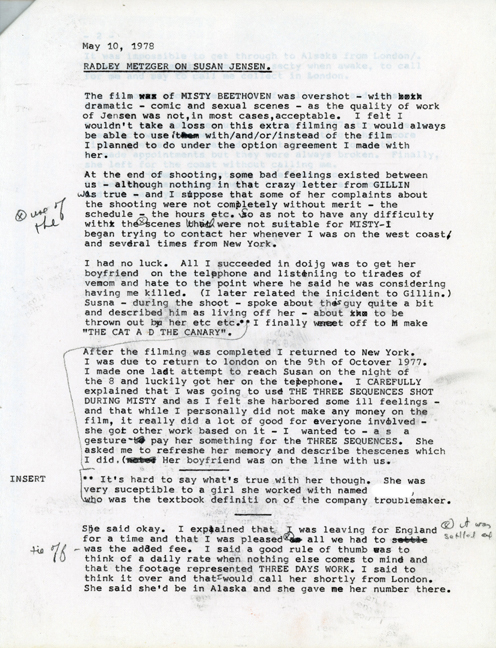 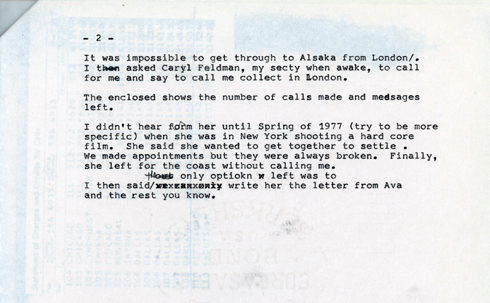 Radley also gave over phone records from Spring 1977 to show that he had tried to contact Susan in both California and Alaska to advise her of his intentions (see underlined records). 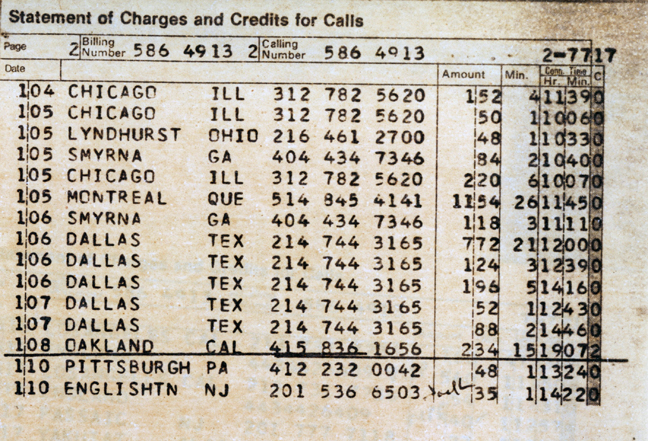 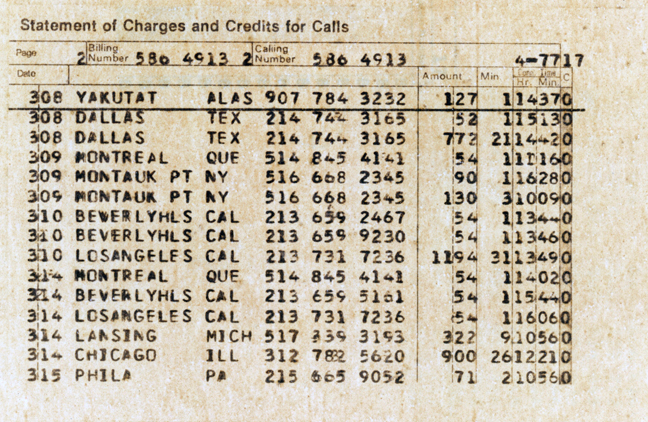 At this point, things suddenly took a turn for the worse for Radley and Audubon Films. Sam Lake and Bobby Sumner – Radley’s co-defendants and the financial backers of ‘Maraschino Cherry’ through their company Maturpix – responded to Susan’s lawsuit by denying all charges. On top of that, they issued a counter-suit against Radley.

Bobby and Sam claimed judgement over any damages claimed by Susan, and a repayment of the $105,000 they had paid to Radley for ‘Maraschino Cherry’ if the film was prevented from being distributed.

Click on the image below to read the full document from Maturpix, dated May 19, 1978.

Radley and Audubon Pictures responded to the lawsuit by denying all charges.

Click on the image below to read the full document from Audubon, dated May 24 1978.

Radley also drew up a series a questions for Susan (known as an ‘Interrogatory’). In effect, these questions were an attempt by Radley and his attorneys to find out how much Susan actually knew about the shooting of the films and the company behind the production.

In Susan’s formal reply, she mentions Radley’s business partner, Ava Leighton, being on set, and also lists the reason she is claiming such high damages as “unjust enrichment of defendants”

Click on the image below to read the full document from Susan Jensen, dated June 8, 1978.

The first decision due concerned whether an injunction should be placed on the release of ‘Maraschino Cherry’. The judgement denied Susan’s request to prevent the film’s release.

Click on the image below to read the full judgement about the injunction, dated June 20, 1978.

While the attorneys argued, Susan appeared in a Playboy magazine pictoral in July 1978.

The accompanying article referred to how Susan had moved to Alaska where she was managing a bar / restaurant. She spoke about her experience in ‘The Opening of Misty Beethoven’ saying:

“I made that movie when I was 19, a child. I was barely old enough to know what I was doing. The film is about the education of a naive, innocent girl. Me.

That film haunted me. The director kept all the outtakes. Every year he released another film starring ‘Constance Money’. ‘Barbara Broadcast’ and ‘Maraschino Cherry’ are two of the exploitation films that used old footage from ‘The Opening of Misty Beethoven’. The films are rip-offs. The films don’t make any sense. Tell your readers to do me a favor and stay home.”

Click on the image below to read the full article in Playboy.

For the remainder of 1978 and the first half of 1979, the case rambled on – incurring more legal costs as both sides looked for an angle that would give them a critical advantage. One example of this was the argument adopted by Radley and Ava Leighton’s attorney which stated that “the plaintiff (i.e. Susan) must be based in New York county”, and that “the affidavit should state that she is such a resident.” This line of reasoning proved unsuccessful.

Overall Radley’s main concern was that he didn’t want to set a precedent – and have other actors pursue him for the same reason. In the end he relented, and asked his attorney to seek an out-of-court settlement with Susan.

On September 25, 1979, a one-sentence letter from Ava Leighton brought the case to a close. 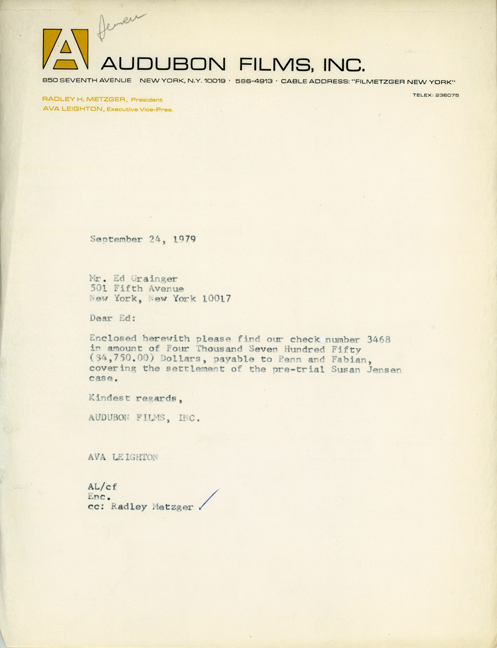 Susan settled for $4,750 – considerably less than the $2,250,000 demanded in the legal papers. Though this amount was twice as much as she had been paid for her original work, she still had to pay several years worth of legal fees.

Ironically the check was sent to Susan four years to the day since she signed the very first agreement – to appear in two films.

Given that the settlement paid to Susan related to footage contained in ‘Maraschino Cherry’, Radley wanted the producers of that film – Sam Lake and Bobby Sumner – to pay a share of the settlement. 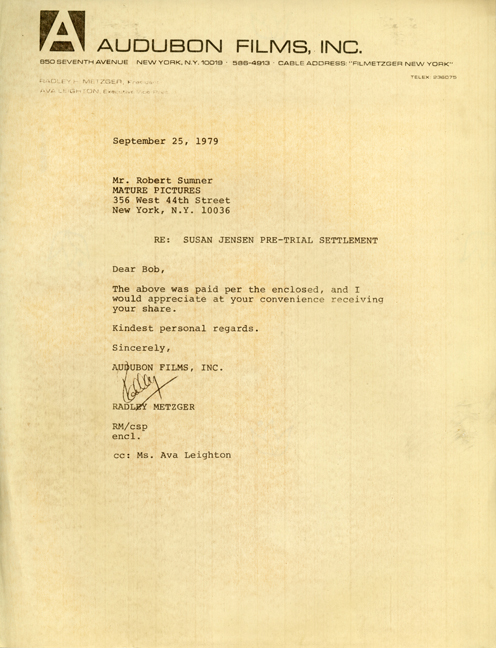 The request was rejected out of hand by Bobby and Sam’s attorneys. To make matters worse, they sent Radley an additional request for $1,900 to cover their legal costs incurred in defending the action. 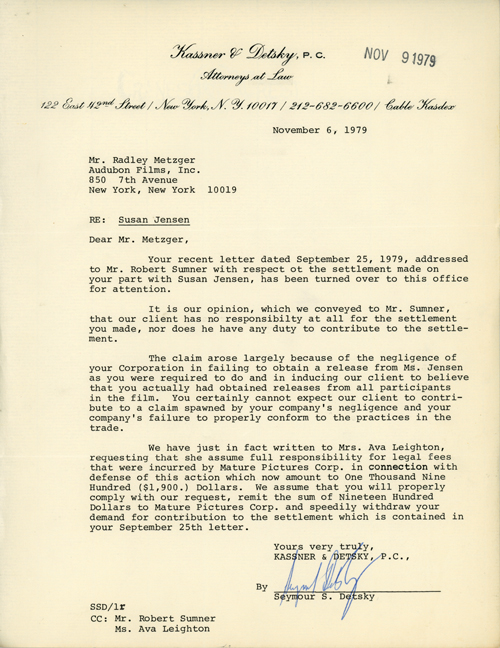 Whatever the merits of the various parties of the case, there are certainly no signs of this protracted legal conflict in ‘Misty Beethoven’ itself. The film remains a light-hearted, happy-go-lucky, and witty affair – much of which is largely due to Radley’s deft direction and Susan’s vulnerable and engaging performance.

Susan and Radley never spoke again after the case was settled.

Susan recently spoke about the period in her audio podcast interview with The Rialto Report, and it was clear that time had not lessened her anger about the events of several decades before.

As for Radley, he professed confusion about the matter right up until his recent passing. He couldn’t understand why the issue had ended up causing so much trouble lasting so many years. He spoke about having done every he could have done at the time, and was disappointed by the acrimonious outcome.

When The Rialto Report met with Radley socially, he often asked about Susan. He realized that, for better or worse, his name and Susan’s would always be inextricably linked thanks to the success of ‘The Opening of Misty Beethoven’. He always requested that we send Susan his regards.