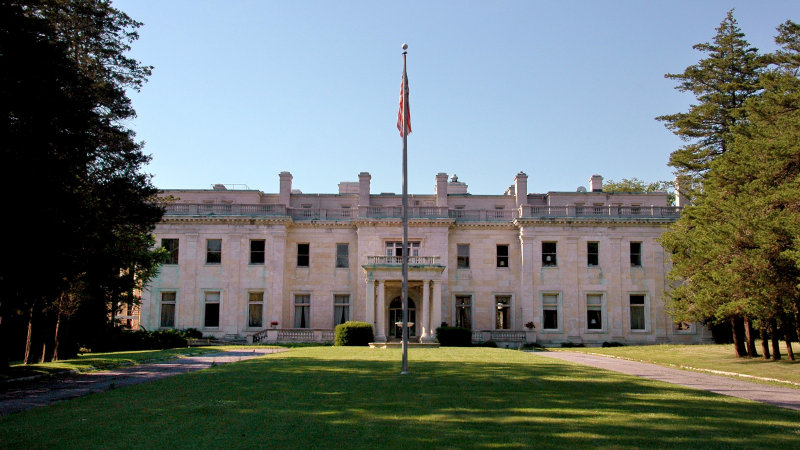 Winfield Hall on the Woolworth Estate on Long Island was used in two of the most revered golden age adult films, Gerard Damiano‘s The Story of Joanna (1975) and Jonas Middleton‘s Through The Looking Glass (1976).

But what is the story behind how the property was selected for the location of these films?

The Rialto Report visited the property in the summer of 2013 to see how the intervening years have treated the mansion, and to search for the ghosts of Joanna and Jason, Catherine and the demon.

Driving along Crescent Beach Road in Glen Cove, on Long Island, is an unremarkable experience. It’s a typically suburban road, lined with modest, friendly houses and it feels like it could be almost anywhere in the country.

But then the unsuspecting visitor rounds the corner and is confronted with a very different proposition: A huge walled estate with extensive gardens surrounding an opulent Italian renaissance-style mansion. In the words of one writer “it appears at the side of the road like a gateway to another era, fallen from the sky”. 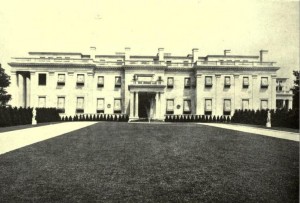 This is the Woolworth Estate built in 1917 by Frank Winfield Woolworth (1852-1919), the founder of the now-defunct five-and-dime stores that carried his name.

The vast and rambling home, with its accompanying gardens and marble fountain, looks like a cross between an old federal building and a house belonging to the character Mr. Darcy in “Pride and Prejudice.” It was designed by noted architect C. P. H. Gilbert (1861-1952) for Woolworth, and with walls and pillars of marble, grand ballroom, not to mention its fifty seven rooms, the construction ended up costing nine million dollars, the grand staircase alone costing two million dollars.

By the 1960s, the estate had been sold several times and had became the Grace Downs Academy, a business school for young ladies. When the Academy shut down in the early 1970s, the mansion stood empty.

It was in April 1975 that the cast and crew of The Story of Joanna descended on the mansion for principal photography.

But the Woolworth Estate was not the first choice for the mansion belonging to the wealthy lead character, Jason, played by Jamie Gillis. 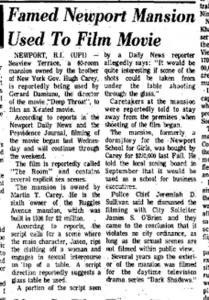 The original shooting location was the Carey Mansion, a sprawling French Renaissance château in Newport, Rhode Island, constructed for two million dollars in 1926, that had previously been the Newport School for Girls.

Carey was looking for ways to generate income from the property and initially he declared that his intention was to create a school for business executives. Somewhere along the way, director Gerry Damiano struck a deal to use the Carey Mansion for the filming of his latest film.

Shooting of The Story of Joanna started in Rhode Island on Wednesday 26th March 1975, but on Monday 31st March local newspapers started publishing stories that the film being shot in their midst was of a pornographic nature. The articles noted that the Carey Mansion was being used by Damiano to shoot his new film ‘The Room’ which ‘contains several explicit sex scenes’. Suspicions had apparently been raised when the property’s caretakers were asked to stay away from the mansion during the filming.

The media even managed to get hold of the shooting script and noted:

“The script calls for a scene where the main character, Jason, rips the clothing off a woman and engages in intercourse on top of a table. A script direction reportedly suggests a glass table be used. A portion of the script seen by a Daily News reporter allegedly says: ‘It would be quite interesting if some of the shots could be taken from under the table shooting through the glass'”

Meetings were immediately convened between the city authorities and the police, but it was quickly concluded that no city ordinance was being violated ‘as long as the sexual scenes were not filmed within public view’. The City also reported that no complaints from the general public had been received.

Initially it seemed that filmmakers could continue unimpeded. Indeed Damiano was interviewed and denied that he was filming a feature length sex film, claiming that he was “just shooting training sessions for young actors”, though he pointedly refused to comment on how he had secured the mansion for filming.

But then other questions started to be asked: how much did the Carey Mansion owner, Martin Carey, or his brother, Governor Hugh Carey, know about film, and were they aware of the film’s pornographic nature? 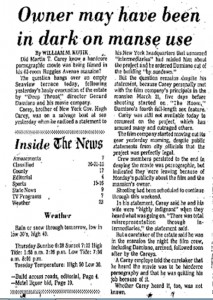 Martin Carey reacted angrily to the news. He issued a statement insisting that his wife and he were disgusted and indignant at the thought of the adult film being made on his property, and stating that he had been “totally misrepresented and misled by intermediaries”. He ordered Damiano and his crew to vacate the property “by sundown on Tuesday 1st April”, even though the filmmakers had been due to continue filming in the Carey Mansion until Sunday 6th April.

The plot thickened when staff at the mansion started to come forward claiming that Damiano himself had actually met with the Careys at the property on Friday March 21st – five days before filming started – to discuss the upcoming shoot. Damiano had apparently even shared the script for The Story of Joanna with the couple. Whatever the truth was behind these allegations, the Story of Joanna crew packed up and moved out.

Fortunately an alternative location was quickly found in the form of Winfield Hall on the Woolworth Estate in Glen Cove, Long Island, and later that week, the cast and crew reunited at the new location.

So who was the owner of the Winfield Hall property – who proved to be much more amenable to the filmmakers than Martin Carey had been in Rhode Island?

Er – that would be the same Martin Carey…

In addition to buying the Rhode Island property, Carey had also purchased the Woolworth Mansion, and still remains the owner of both properties today. In fact the entrance to the Woolworth estate is via a towering marble archway about 15 feet high with the name ‘Carey’ emblazoned on top in gold letters. 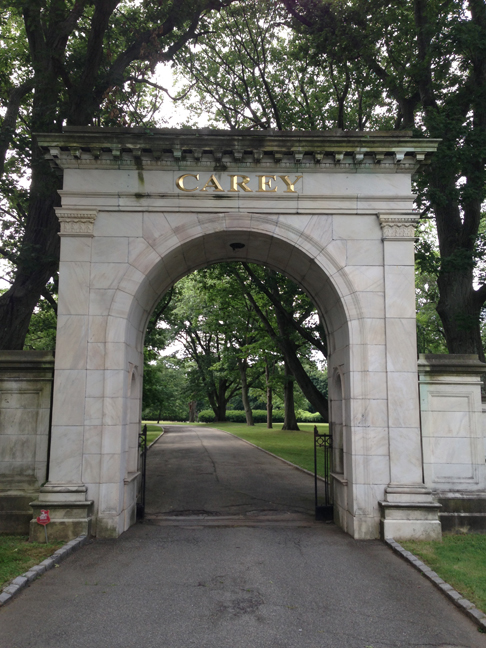 The question remains as to how much footage was shot at the Carey Mansion on Rhode Island before the filmmakers were forced to leave. Jamie Gillis was present at both locations, and when interviewed by The Rialto Report in 2009 said that he believed most of the footage in the finished film was shot at the Winfield Hall location. Juliet Graham, who also acted in the film and was living with Gillis at the time, recalls only being present for the Long Island part of the shoot.

Just four months later, Winfield Hall was visited by another adult film crew, this time led by director Jonas Middleton, who was filming his film Through The Looking Glass. This shoot took place over a two week period in scorching hot conditions in the last week of July and the first week of August.

For Middleton it was a daunting experience; he was 30 years old at the time and was overseeing a large cast and crew, not to mention the budget of $150,000 – unprecedented for an adult film at the time.

When The Rialto Report spoke to him about his memories of the Woolworth Estate, he recalled:

“It had been used as a modelling school in the early 1970s, but had clearly stood empty for a few years by the time we got there – I remember that it was pretty much abandoned at the time. It was still an impressive and grand, decadent palace though, and I remember thinking that it contributed to the sexual mood of the story we were creating. I was introduced to the owner by a local real estate agent; we entered into a formal agreement with the owner to stay at the house and use it for most of the principal photography. It was a strange shoot; over the course of our stay there, several of the crew reported seeing visions of spirits or ghostly old people and hearing strange sounds at night.

I made sure I arrived a week before shooting with a small crew and we set about cleaning up the rooms that we wanted to use, and tidying up the parts of the garden where we wanted to film. The garden was completely overgrown so that took ages to fix.

We filmed the attic scenes in the garage; it was a huge space that we converted into a sound stage which worked perfectly for us. 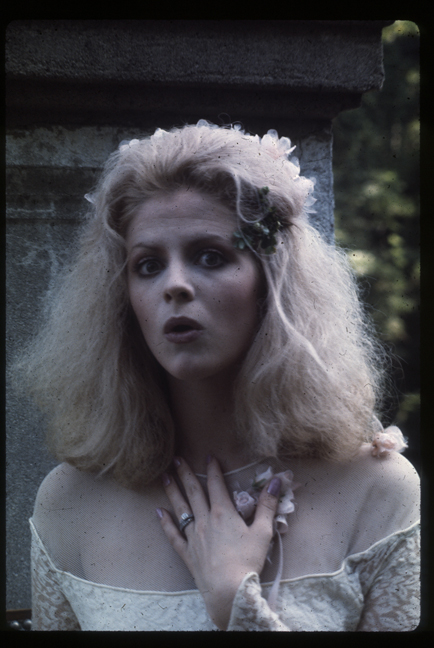 Catharine Burgess in a still from Through The Looking Glass 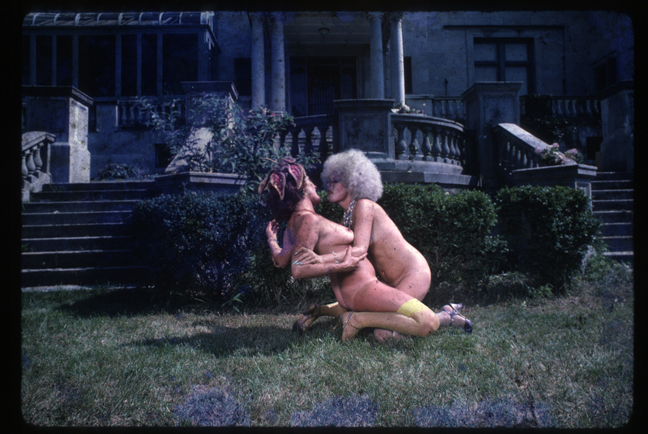 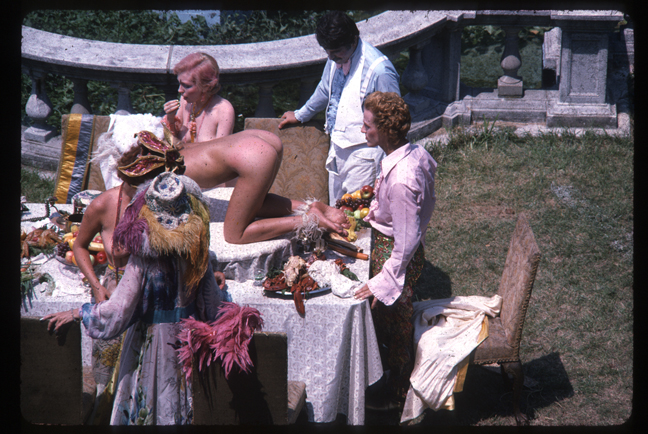 Kim Pope, Jeffrey Hurst, and Jacob Pomerantz on the lawn 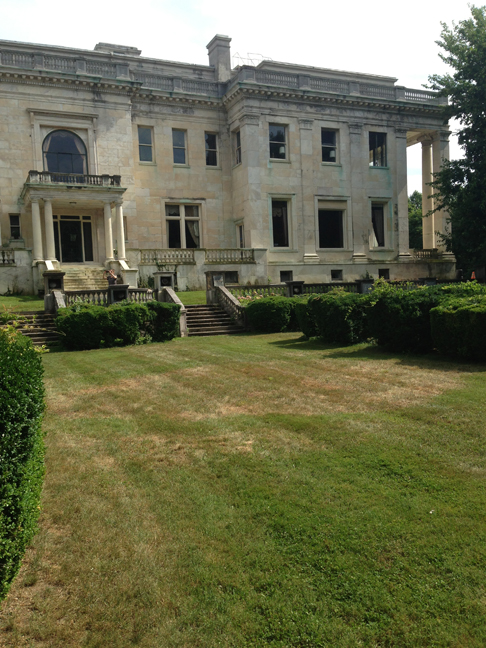 The lawn at the side of Winfield Hall in 2013 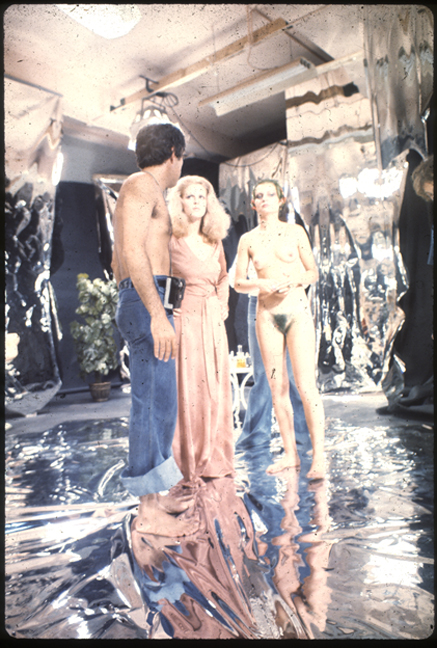 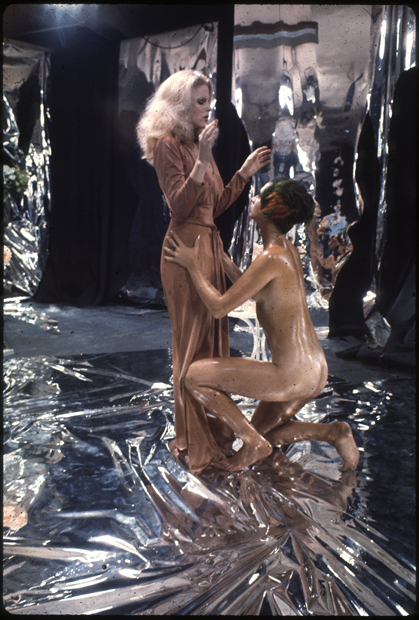 But what of the Woolworth Estate today?

In 1979 it was listed on the National Register of Historic Places. Over the years, there have been many stories that Winfield was haunted – tales of secret passages and tragic accidents; strange conversations echoing in empty rooms; suicides, séances and strains of eerie music erupting at all hours from the pipe organ. Author Monica Randall recounts some of these stories in her book Winfield: Living in the Shadow of the Woolworths. 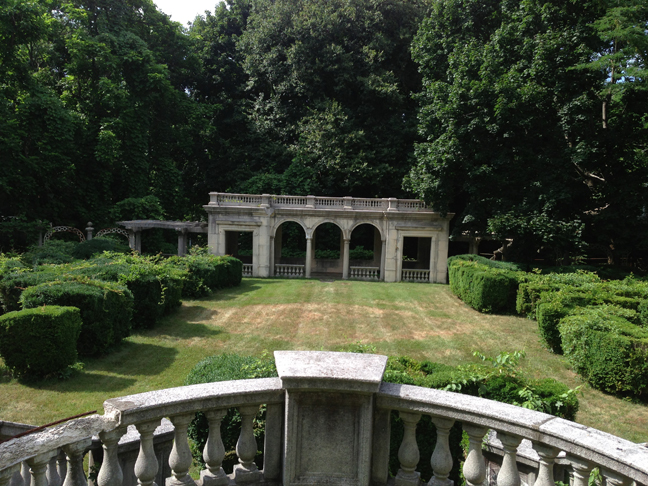 It has been leased out for a variety of purposes, such as office space to the East Hills-based Pall Corp., which manufactures filtration and purification systems for the pharmaceutical, medical and semiconductor industries.

In recent years it was listed for sale with Glen Key Realty for $19.5 million, where it was described as “a nine-bedroom, ten bath, one half-bath house, a carriage house and a 16,000-square-foot office building. It also features a clock tower, a marble spiral staircase and marble fireplaces”. 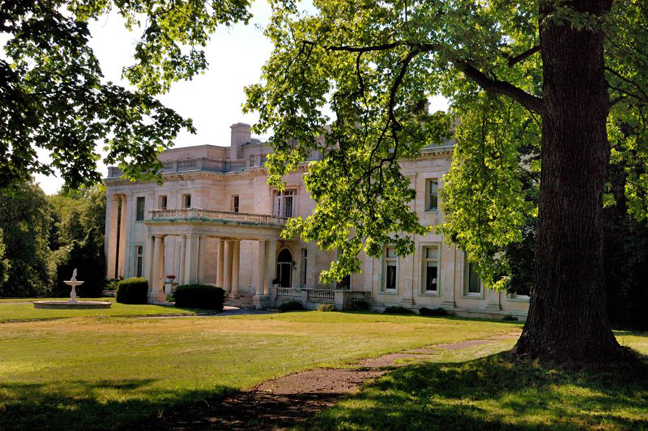 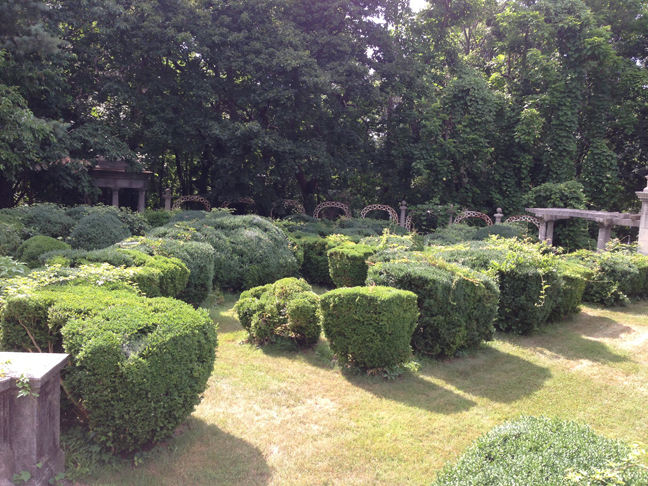 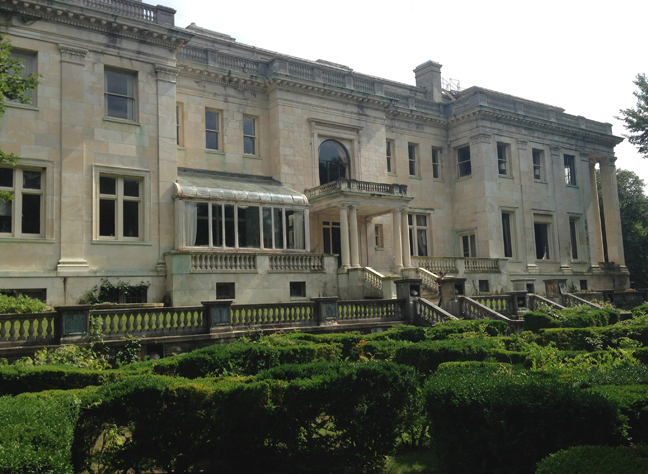 In 2010 it was taken off the market and used by HBO as a location for their miniseries Mildred Pierce starring Kate Winslet, Evan Rachel Wood and Guy Pearce. The show contained extensive scenes shot at Winfield Hall, though palm trees were added as the house was supposed to be in California, the setting for the story.

Today, the Careys rent it out for film and photo shoots, and Mrs. Carey recently said they were using the proceeds to make restorations, in the hopes of bringing back a little more of the home’s former glory. According to the location scouting site for this house lists that there is only one usable bathroom, no air conditioning, poor heating, and that the windows don’t open. 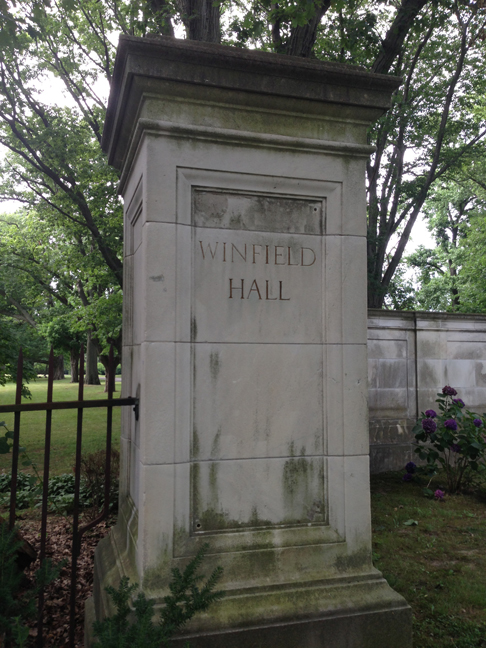 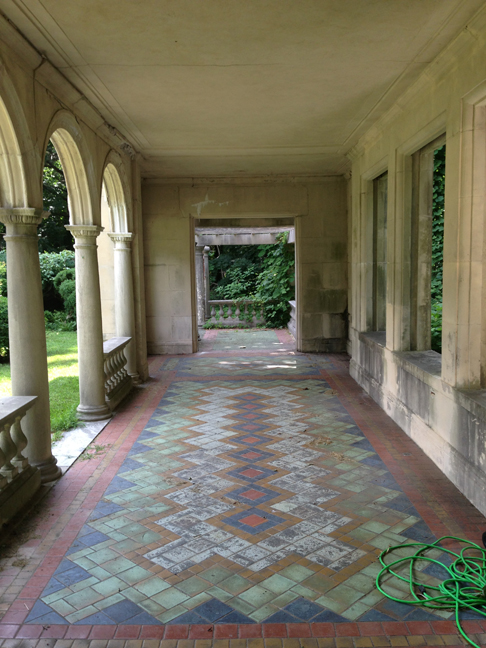 If you were involved in the filming of The Story of Joanna or Through The Looking Glass, we’d love to hear from you. Please get in touch via our email address: info@TheRialtoReport