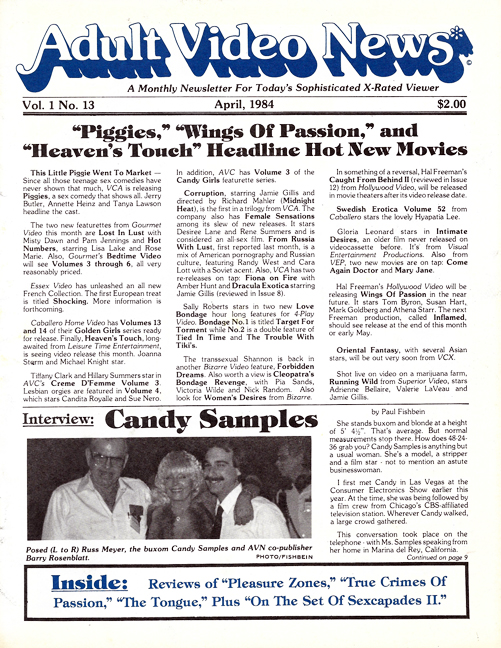 Adult Video News (AVN) was the most important of the industry magazines to cover the burgeoning adult video industry in the 1980s. From its modest beginning as an 8-page newsletter with limited production values in 1983, the magazine went on to become a 300-page glossy that dominated coverage of the industry. (You can learn more about the AVN’s first year, and access issues, here.)

1984 was the second year of the publication. Two of the three founders – Paul Fishbein and Barry Rosenblatt – were still at the magazine’s helm. Third founder – Irv Slifkin – left that year, going on to more mainstream endeavors such as Movies Unlimited Video Catalog and reviewing films for publications such as Entertainment Weekly, the Los Angeles Times, the Philadelphia Inquirer, and the Chicago Tribune.

Key to the magazine’s importance were the interviews with stars and directors, and AVN‘s second year includes interviews with people such as Hyapatia Lee, Henri Pachard, Richard Pacheco, Tiffany Clark and Candy Samples, in addition to reviews of movies such as Reel People, Smoker, Insatiable II, Talk Dirty to Me Part III, and much more…

Copies of the magazine’s early editions have been near impossible to find since their first publication, and The Rialto Report is happy to re-publish them and make them available again.

You can find The Rialto Report‘s ever growing library of digitized resources by clicking ‘Library’ in the menu.

Many thanks to Mark Kernes and Carol Walker for their help.