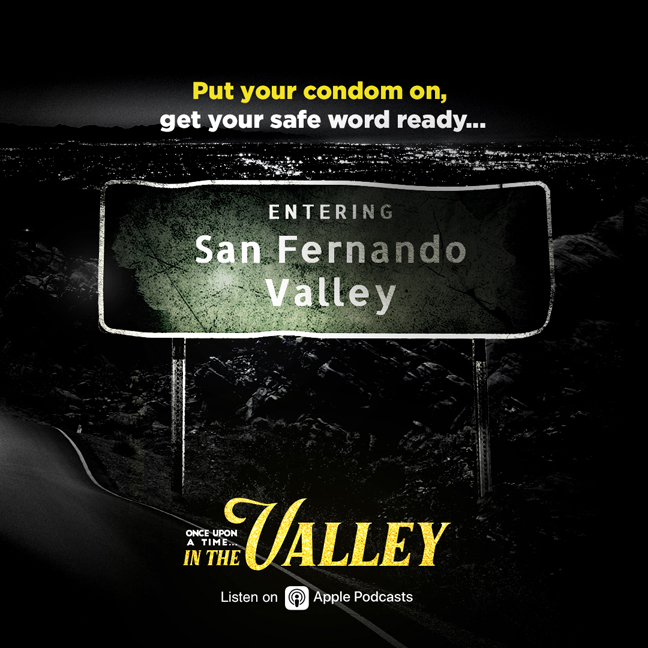 ‘Once Upon a Time…in the Valley’, a new podcast series co-produced and co-presented by The Rialto Report’s Ashley West, launches today with the first three episodes.

Episode 2 – Wanted: Figure Models
A 15-year-old Redondo Union High sophomore learns to fake it so she can make it… as a nude model.

Download via Apple Podcasts, Spotify, RADIO.COM and everywhere podcasts are available.
New episodes will drop every Tuesday throughout the series. Subscribe to the series for free here.

C13Originals Launches Season One of its new Documentary Series, ‘Once Upon a Time… in the Valley’: The Traci Lords Scandal

As Anolik cautions, “Put your condoms on, get that safe word ready” because she and Ashley are going in hard and deep. It’s the San Fernando Valley. It’s the mid-1980s, the moment the industry is exploding: moving from New York to L.A., from film to video, from the shadows to the spotlight. Traci may be the series’ focus, but its setting and supporting players—Ginger Lynn, Christy Canyon, Tom Byron, to name but a few—are so dynamic, they’re constantly threatening to upstage her. (Not that she’ll let them.)

“It’s the story I’ve wanted to tell more than any other,” says Lili Anolik. “Just imagine Boogie Nights, if Boogie Nights had a three-way with Gone Girl and A Star Is Born—and it let Gone Girl be on top.”

“Lili’s instincts for storytelling, and her brilliant writing style are on full display in this franchise,” said Chris Corcoran, Chief Content Officer, Cadence13. “The launch of ‘Once Upon a Time…in the Valley’ marks the continued expansion of the C13Originals slate, and the boundary-pushing, and thrilling ways we can tell compelling cultural stories with the best storytellers.”

Once Upon a Time…in the Valley was created and written by Lili Anolik in collaboration with, and produced by Peabody-Award nominated C13Originals, a division of Cadence13. The series is Executive Produced by Corcoran and Anolik; produced by West; directed by Zak Levitt; edited and mastered by Chris Basil, Bill Shultz, Perry Crowell, and Ian Mandt; with theme music and original score by Joel Goodman.

Lili Anolik is a contributing editor at Vanity Fair. Her work has also appeared in Harper’s, Esquire and The Paris Review, among other publications. Her latest book, the Los Angeles Times bestseller Hollywood’s Eve: Eve Babitz and the Secret History of L.A., was named one of Esquire’s Best Books of 2019.