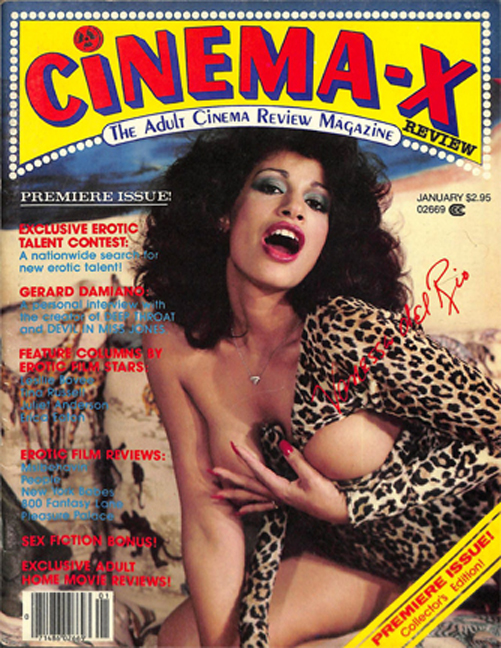 We look at the creation of the adult film magazine, Cinema-X Review, in an interview with one of the founders, Jason Russell – and continue our digitization project by re-publishing issues of the magazine from 1980.

These issues include interviews with people such as Gerard Damiano, Chuck Vincent, Jennifer Welles, and Gloria Leonard, articles about Lesllie Bovee, Vanessa Del Rio and Kandi Barbour, and reviews of movies such as 800 Fantasy Lane, The Ecstasy Girls, Her Name Was Lisa, and The Budding of Brie, and much more…

You can find The Rialto Report‘s growing library of digitized resources by clicking ‘Library’ in our site navigation menu.

Magazines are fully searchable; use the icon displayed in each magazine to search by keyword.

Cinema-X Review – The Rise and Fall: An Interview with Jason Russell

The Rialto Report met Jason Russell in the last years of his life when he was living in St. Petersburg, FL. He was a man of few words, but spoke with us about his long career in adult films – including the following conversation about the creation of the adult film magazine, Cinema-X Review.

What was your involvement in the start of Cinema-X Review?

What do you remember about each of them?

Bobby Hollander and Ted Snyder were Jews from Brooklyn who wanted to be wise guys. They wore big gold jewellery and fancy clothes, and liked to live large. They talked about movie deals as if they were Louis B. Mayer.

Bobby G at least was Italian, but he was just the same. Big gold rings, big cars, expensive restaurants – that was his personal brand.

Teddy was my best friend. We were both photographers, cameramen. In fact Teddy was one of the first to shoot me and Tina (Russell – Jason’s former wife) when we started in the business back in 1969. Teddy and I were the same age, which is to say about 10 -15 years younger than Bobby Hollander and Bobby G.

Anyway, like I say, we’d hang out together. And do drugs.

Where did the idea for Cinema-X Review come from?

Bobby Hollander had got involved with Gloria Leonard. I don’t know if they got married because Bobby was always messing around with other women, but they were basically together.

Gloria had been the editor or publisher for High Society magazine for a few years, and the magazine was doing great. The problem was that Gloria was on a flat salary and received no upside on the back end for all the work she did. Bobby thought we should start our own magazine that we each owned a piece of. So the four of us decided to set it up.

Whose idea was it to focus on adult films?

Bobby Hollander also made sure that he promoted anything we were doing outside of the magazine in the pages of the magazine – like working on the movie “N.Y. Babes” (1979).

How did you divide up responsibilities?

Bobby was the guy with the connections to the publishing contacts through Gloria, so he took the lead. But at first, we managed it together.

There were a few other similar magazines at the time. How much were you aware of them?

Very aware. We stole the best ideas from them, and came up with a few new concepts ourselves.

What’s an example of something you stole?

We graded each film we reviewed on a scale of 1 -100… which was like Screw magazine.

And like High Society we got stars, like Annette Haven and Lesllie Bovee, to write regular columns. Bobby Hollander also wrote an introduction each month, just like Gloria did in High Society.

And how about new ideas?

We decided that all of the film reviewers would be adult film celebrities. So people like Tina and Juliet Anderson wrote for us.

Also we focused on publishing fiction too. Each issue had a lengthy story. No one else was doing that.

And our magazine was more explicit. This was important to us. We knew other magazines would talk about sex in films, but we wanted to show it. I think we were one of the first monthly magazine to really do that.

How was the magazine launched?

We were due to start publishing the previous year, but Bobby had some problems with the printers because it was hard core, so we had to hold off for a while. This meant that when we put the first issues out in 1980, a lot of the reviews were for films that had come out in 1979 or even 1978.

I remember we had an interview with Jennifer Welles, who’d left the business a few years before… No one seemed to notice though.

Did the magazine make money?

Yes. We had good circulation. We also had more pages of advertising than other magazines. That was deliberate, so we made money that way as well.

We also charged filmmakers to have their films reviewed in Cinema-X. We’d tell them to send us stills from their movie – and a check for… say $1,000 bucks, and we’d make sure we gave them good coverage.

Some of the guys complained, but they could see we did a good job in getting the word out about their latest flick… so most went along with it. I remember Howie Winters kicked up a fuss, but that was all.

Did you enjoy your involvement in the magazine?

I liked taking photographs, and making movies, so as long as I was doing that I was happy. There was a lot of other stuff with the magazine that I didn’t dig, and that got me down.

I moved out to California in the late 1970s. This helped the magazine because I was able to get west coast filmmakers to feature in the magazine.

How long did you stay involved with Cinema-X Review?

I stayed involved for the first year, but then I started to find other things I wanted to do more. By then Bobby Hollander, Bobby G, and Teddy had moved out to Los Angeles as well, and we were all more interested in producing movies than publishing a magazine, so it came to a natural end.

The last issue was in June 1981. Were you involved when it closed down?

It didn’t really close down. It was sold to some other people, like Peter Wolff who’d been the editor of magazines like Cheri and Partner. It just changed its name to Adult Cinema Review – and kept going with a different group of people.

By then I was long gone.

Did you stay in contact with the other guys?

Me and Teddy set up a partnership in L.A. We helped Bobby Hollander make many shot-on-video movies in the 1980s. Bobby ‘managed’ Shauna Grant for a while. Then he got cancer and died about 5 years ago (in 2002).

Teddy Snyder formed a series of production companies including Video Cassette Recordings (VCR). He and Bobby G eventually went into business together. I shot a lot of loops and short things for them – including some of Traci Lords first shorts. Bobby G and Teddy made a shit load of money with their company. They did very well. They were finally ‘big-time.’ But they got in bed with the wiseguys, and that was too much for me. I wanted to stay outta trouble, y’know?

You ever hear what happened to Teddy? Crazy story. He was shot dead in front of his house in 1989. Everyone thought the mob was behind the hit, but it turned out it was his wife, Sharon, that killed him. Actually it was his coke dealer who pulled the trigger. Sharon paid him to do it with a rare $10,000 bill from Teddy’s collection. This dealer took it to a regular bank to exchange it for smaller bills. The problem was that everyone knew Teddy had this bank note because it was framed in his living room – so when the cops found out, they arrested the dealer and Sharon. The dealer got a long sentence, but Sharon got off because she said he’d acted alone.

That’s pretty much the story of Cinema-X Review.