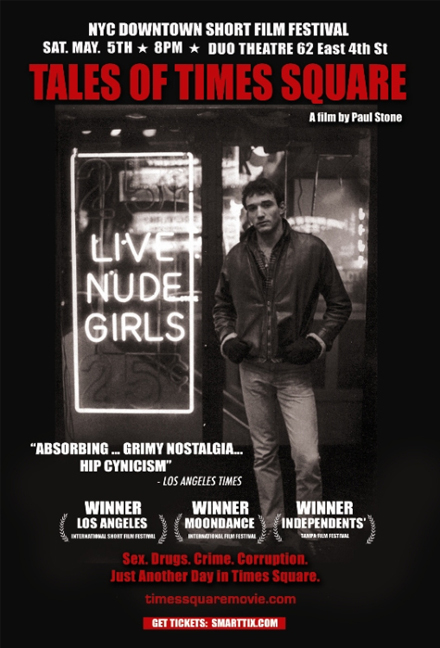 ‘Tales of Times Square’ is a great documentary by Paul Stone based on the cult classic book by Josh Alan Friedman.

‘Tales of Times Square’ concentrates on the period from 1975 to 1989, which Stone labels the ‘golden age of pornography’ in mid-Manhattan.

Josh Alan Friedman (born February 22, 1956) is an American musician, writer, editor and journalist, who has worked in New York and Dallas. He is widely known for his 1986 collection Tales of Times Square and his often-controversial comix collaborations with his brother, artist Drew Friedman. Many of these are compiled in the books Any Similarity to Persons Living or Dead is Purely Coincidental and Warts and All. Friedman is also a successful musician and songwriter, recording and performing under the moniker Josh Alan.

Writing career
Friedman’s first published work was for Screw magazine. He continued to write for the magazine for several years, eventually holding the position of Senior Editor through 1982. He covered the Times Square beat for Screw during a perilous time when few, if any writers, ventured there. He also worked as a producer on Screw’s cable television show, Midnight Blue. Several of Friedman’s Screw pieces would eventually serve as the foundation for his 1986 collection, Tales of Times Square, documenting “pre-Disney” Times Square. By the late 70s, Josh’s brother, artist Drew Friedman, was drawing covers for Screw, some conceptualized with Josh. Additionally, “Meeting Groucho,” Friedman’s childhood reminiscence of a memorable dinner with comedian Groucho Marx, was published in New York Magazine as “A Memory of Groucho” in August 1978.

Concurrently, Friedman worked as a stringer for Soho News, contributing celebrity profiles, notably of legendary songwriter Doc Pomus. Pomus became a friend and mentor, and Friedman credits Pomus with teaching him to be a songwriter “without him knowing it. Just by hanging around him, I felt like he taught me how to write songs…that’s what turned me from being a frustrated songwriter into a songwriter.”